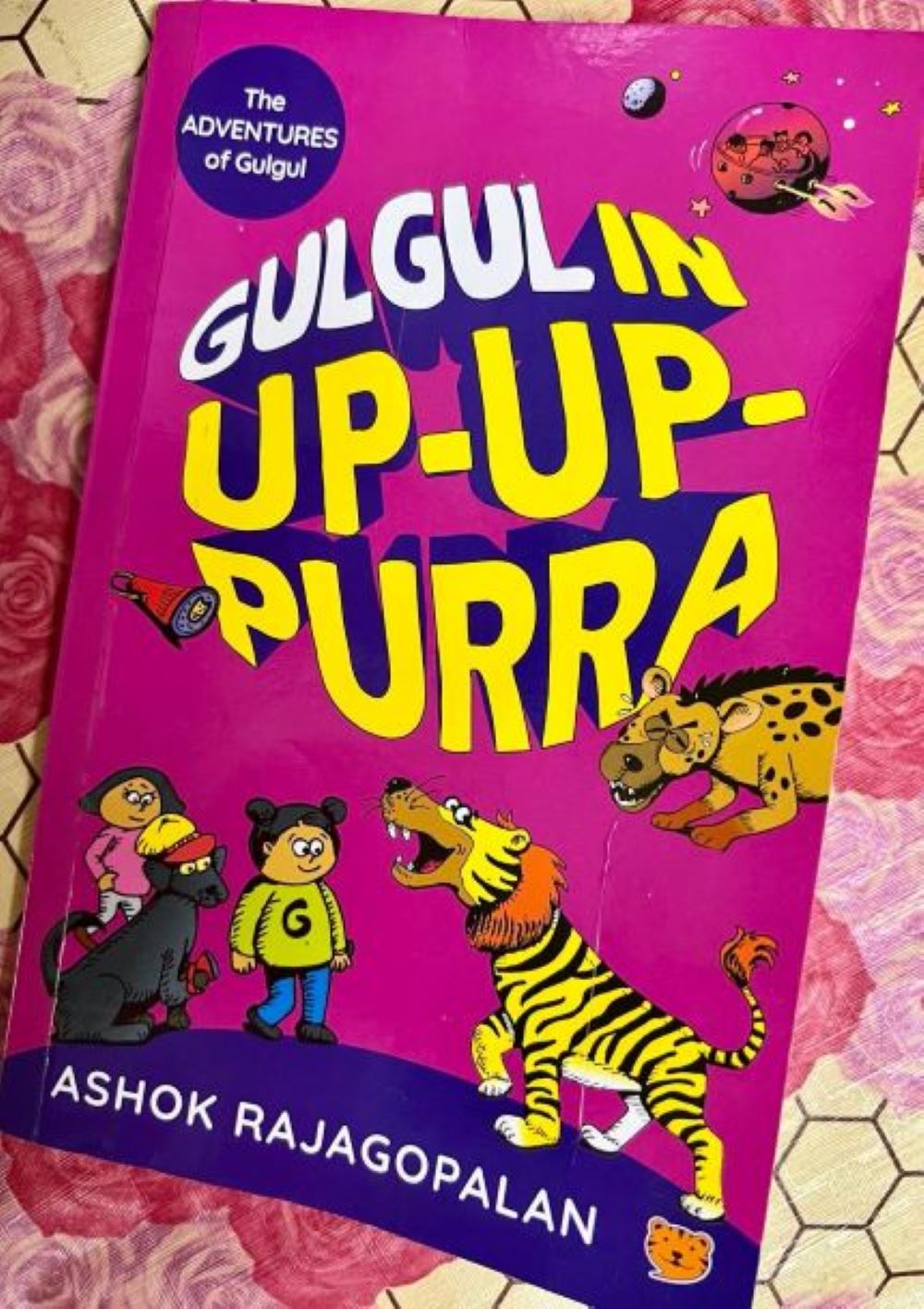 I am posting this review on behalf of my 10 year old boy, Bhavik.

Gulgul is celebrating her birthday. Her Aunt Jinny says that she is going to get her a robotic pet pup or robotic kitty as they are not allowed to keep a real one on their planet Gr33n. Soon they are off to another planet Puppura which Aunt Jinny claims to have the biggest and best robotic pet store in the galaxy. A driverless cab arrives on their terrace to take them to another planet.

While they are going to the pet store planet, Jit, Jinny’s brother and Gulgul’s father, accidentally makes the cab to go to a different planet, Up-Up-Pura instead of Puppura

Only after they got off the cab and Jinny checked her watch, which told them that they were on the wrong planet (Up-Up-Pura), then only they realized that that have come to another planet. But it was too late as the cab had already left and would come only after two hours! They decided to explore the planet Up-Up-Pura as they were left with no choice. The lift took them to the underground where they saw houses like kennels.

It turned out that one half of the planet was occupied by cats and the other half by dogs. There was going to be battle between the cats and dogs over the name of the planet. The doggos loved the name Up-Up-Pura but the cats felt it was too biased towards the dogs as it had the word ‘pup’ in it and nothing like ‘kitty’ or ‘cat’. There even was a battle i.e., lol-fight between the cats and the dogs on Up-Up-Pura because the name!

Gulgul and her family being the only humans present there, get involved in that fight somehow.

Will they be able to sort out their fight over the name of the planet?

Will Gulgul get her birthday gift?

Join Gulgul and her family on their hilarious and adventurous trip to this planet called Up-Up-Pura, roll on the floor through the lol-fight and help them tackle this namastrophe (rhymes with catastrophe :P)!

I loved this book as the story involved different planets, robotic pets, bubble shaped driverless cab and lot of other entertaining things. The lol-fight between the cats & dogs was very humorous and kept me laughing until my stomach and cheeks hurt. The book will keep you purring, captivated and laughing from the start, until the end. Beautiful illustrations made the story more fun.

You can read reviews of the other books in this series Gulgul in Jungalu , Gulgul in Sea-Saw Gera and Gulgul in Parapara on our site as well. There are some new releases in the Gulgul series. Check them out here on amazon. You can read Divit’s review of Gulgul in Papadom here.

If you enjoyed this review and wish to explore another planet with Gulgul, then you might want to buy the book from Amazon (kbc affiliate link),