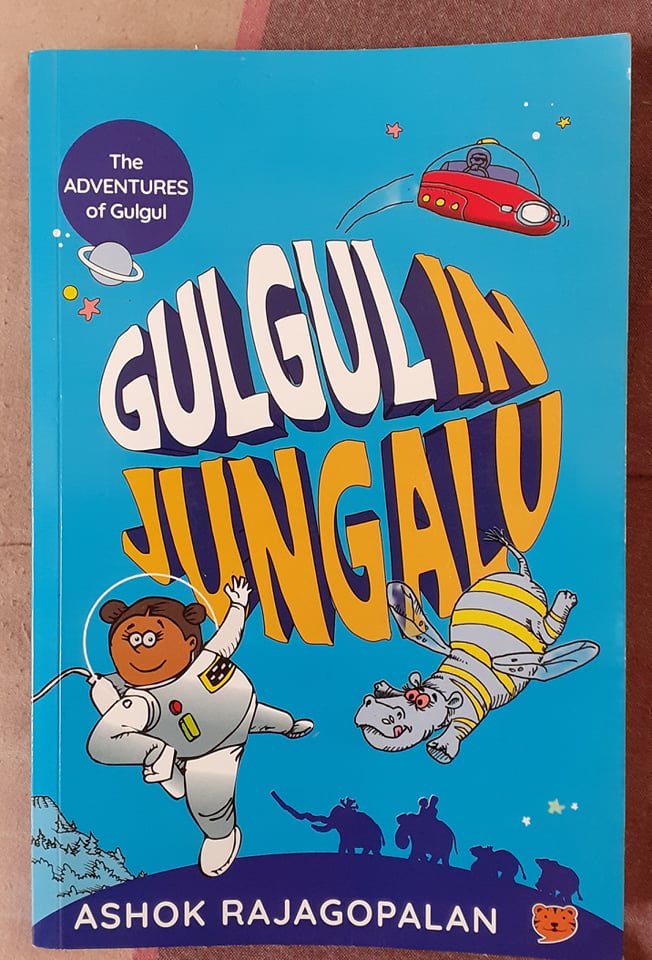 I am posting this review on behalf of my daughter Prisha Ambi (9 years old) who is crazy for books.

The story is about a girl Gulgul who was lost on another planet with her family and how they found their way home. A funny story, wrapped with a message for kids.

Gulgul was on a vacation with her father Jit and mother Megha on planet H4H4H0. She was missing her home (their native planet GR33N) so much, that she began to trouble her father to drive their space car really fast. But her father Jit could not control the car and it hit a rock coming their way. Then it bounced to another and another….!

There happened to be a planet nearby called Jun84lu. The family thought that they would land beside a lake on Jungalu (Jun84lu). But because of the broken engine of the car, they crashed in the lake! They built a bubble around them and let the car sink into the lake. Suddenly an octopus-like hand shot out, threw the bubble out of the water and it landed on a bush!

The animal who threw the bubble out was like an elephant with a very long trunk (the octopus-like hand mentioned above) and had yellow skin with pink patches. His name was Hatch Patch. He took them to his house and introduced Gulgul’s family to his wife Match Patch and two little kids Pitch Patch and Katch Patch. Megha asked if Hatch Patch could remove their car out of the lake but unfortunately, the lake was bottomless.

Megha designed a Zingjuck on her pad. A Zingjuck which was a platform that could throw the bubble out into space and they could contact a space cab from there. But they could not cut trees for wood or mine metal for tools because of the Jungalu’s rules.

So next they went to Wise Mahali who was their leader and a huge mouse. She called out some names of animals that Gulgul had never heard of before. Each family member would find 3 animals in 3 days. On the 3rd day all the animals gathered around Mahali’s house. When she came out, she gave some instructions to Megha and Hatch Patch then gave the animals some instructions too! Then Gulgul, Jit and Megha went inside their bubble. Till that time the animals had formed the Zingjuck.

Hatch Patch tied his trunk with Match Patch’s then they put their trunks under the Zingjuck (formed by other animals), swayed it around and Whooooooosh they were in the sky and space. From there Megha contacted a space cab.

My favourite part is when Gulgul met Hatch Patch because he was the one who helped Gulgul, Jit and Megha to reach GR33N, their home planet.

My take from this book

You can read reviews of the other two books in this series Gulgul in Sea-Saw Gera and Gulgul in Parapara here as well.