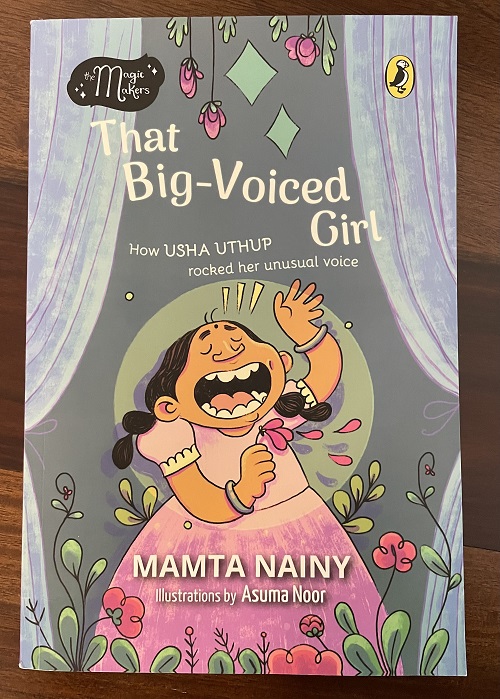 I have two daughters and both are completely opposite. The younger one is a chatterbox and the elder one is very calm. The younger one gets too much and too loud at times. She doesn’t care about what others think of her and she does not ever change her mind. It was very difficult for us as parents, having no control over our own child. We could not continue disciplining the elder one because it was just not fair.

And that’s how we realized that personality can be much more powerful than parenting.

Children can do wonders if they are supported and motivated to utilize their inherent capabilities.

Every child needs a book that tells them to embrace their limited-edition features. Mamta Nainy has again won our hearts by celebrating individuality in “That Big-Voiced Girl”, a picture book for children to discover “How USHA UTHUP rocked her unusual voice”. The story is then decorated by Asuma Noor’s humor sprinkled illustrations.

Usha Uthup reached the success she desired, despite the misjudgments she faced in her early childhood. She had a noticeable voice that did not match children of her school or other famous singers she used to follow on radio. Her music teacher always gave her instruments to play, when she wanted to sing in the choir.

She broke all the stereotypes. She was a female who sang songs in a very bold voice. She sang playbacks for both male and female artists. She even wore saris for western music performances. She sang a variety of music and opened doors to fusion for other Indian artists.

Today she is an inspiration for never giving up on her deepest desire. It was music that she loved and that’s what she continued learning, experimenting and sharing with the world. She is a role model to become one’s own role model.

I love the way this book is written for children. My younger one was diving deep into the illustrations. Our little miss LOUD has got a BIG dose of encouragement. For my elder one it was like a fairytale. A princess is born, she follows her calling, she is unstoppable, she wins hearts of her people, she becomes the Queen of Pop, but that’s not “The End”.

The book also includes a biographical one pager in the end. I wish I had a book series like this in my childhood. There are two other books in The Magic Makers series – ‘Roshan’s Road to Music‘ and Looking For Inspiration: How Rabindranath Tagore Penned his Favourite Poem!

If you enjoyed this review and wish to make your own music, then do order the book from Amazon (kbc affiliate link),

Disclaimer: Mona and her daughters are part of the #kbcReviewerSquad and received this book as a review copy from the publisher.