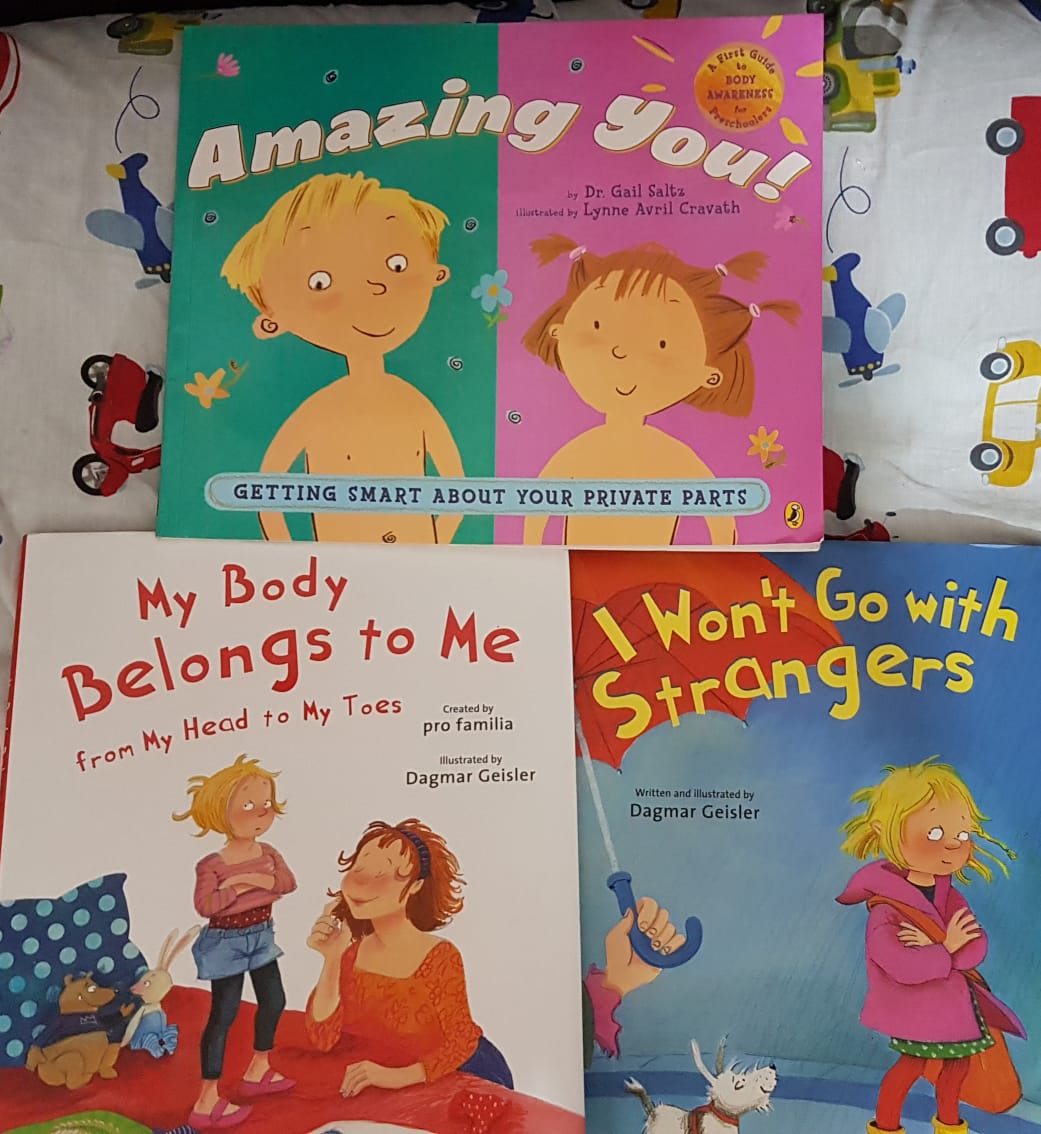 As many of our pre-schoolers may start physical school later this year, we parents face unique challenges. Of them, teaching them to be safe is the biggest one. How do we do that when they have remained relatively isolated the last one year in the safety of their house? Through books of course! These three books were the ones that I found best suited for 3.5 years+.

i. My Body Belongs to Me – from My Head to My Toes (by International Center for Assault Prevention): Sometimes a child does not like to be touched, but does not know how to deal with it. It is not always about “Good Touch, Bad Touch”, it could also be about simple invasion of personal space – another child tickling them when they don’t want to be tickled, or picking them up when they don’t want to be.

My 4 year old (who still looks like a 2.5 year old), comes across as this cute baby in the park, and all the elder children will pull his cheeks and hug him, pick him up. For a child who hates being cuddled by his parents, this is obviously very distressing and I have seen him completely lose it and scream sometimes.

The book is very gentle in explaining that it is okay to like certain types of touch (hugging your parents) and not liking the very same actions with others:

“It feels nice and cozy when papa hugs me” but a few pages later it states, “I feel trapped when someone hugs me too tight, I don’t want to be held like that”.

The book gently explains that you and only you get to decide who touches your body, and also who you should touch. So, neither should anyone forcibly touch you or force you to touch them. This book will not only teach kids about being safe from abuse, but will help them stand up for themselves against physically being pushed around on the playground too. It gives them a statement

“Please stop, I don’t want to be touched”, which empowers them to be assertive when needed.

ii. Amazing You: Getting Smart about your Private Parts by Gail Saltz and Lynne Avril Cravath: Awareness about body parts, including private parts is probably the first step towards being safe. Using the correct anatomical names for body parts can help a child view body parts as what they are – body parts, instead of associating them with a mystery similar to that which must not be named! This book helps a child know all private parts (boys and girls) in great detail.

Many parents, myself included, hesitate when it comes to discussing private parts. I’ve found that having a book that lays it out in front of me, in an age appropriate way, helps.

The book has illustrations of the male (and female) genitalia that satisfied the curiosity of my 4 year, without making me uncomfortable. It is also the only book that has illustrations showing how private parts progress as you grow, and so it explains why the girl children do not have breasts but mummies (being grown up) do have them.

The book is also the simplest introduction to where do babies come from, and so it is the only early sex education book you will ever need.

iii. I Won’t Go With Strangers by Dagmar Geisler: How do you teach a child stranger danger without making them paranoid about everybody? This book manages to do that really well.

The story is about a girl who has been told by her mother that she can go home only with her mother, father or brother. While she waits outside school in the rain, several people come by – some of whom she knows really well and some who she doesn’t know.

The story shows the thoughts that go through her mind with each person – what must be that person’s favourite food? What must be their favourite soft toy? In most cases, she doesn’t know the answer to all the questions (meaning she doesn’t know them well, and so there is no question of going with them), but in one case she does know all the answers (her neighbour) but even then, she remembers the list her mother gave her, and says out loud that mumma said that I must wait for her.

I’ve been using this book to teach my son that he must not wander off with anyone except mumma and papa (not even with his best friend).

Don’t Hug Doug (He Doesn’t Like It): A story about consent is a book recommended by Achira to help kids understand boundaries when it comes to HUGGING. This book can help kids who like hugging other children but don’t understand that the other child may not want to be hugged.