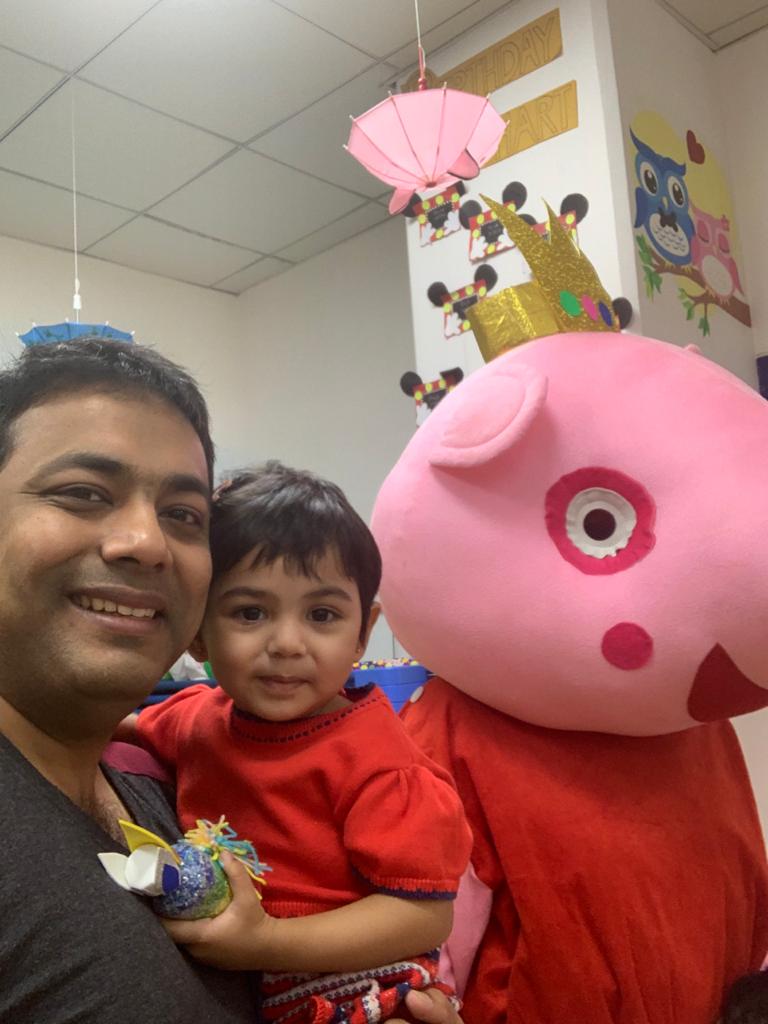 This is my husband Dev’s entry for the #kbcADayWithDaddy contest. This is his narration of the first day he spent alone with Ishani.

Prachi, my wife is our daughter’s principal caregiver and hence Ishani is more comfortable with Prachi being around her. Ishani was a 22 months old when I had a family event at work with activities for children. Prachi had some commitments and could not go but she insisted that I take Ishani. I had doubts in mind, whether I would pull through without hiccups.

I wanted my daughter to have my full attention and hence hired a cab since driving would have meant her being strapped to her child seat in the backseat and be alone. Things started smooth and she was excited during the car ride. She was recognising cars, cabs, buses, bikes, et al. However, the moment we reached the venue she felt insecure. The place was full and she knew no one. It was then that she uttered the dreaded words,

Now, in order to make her enjoy her day, I had to ensure to keep her engaged. I resorted to the quintessential technique of showing her things around, kids running amock, decorations, balloons, etc., hoping something worked. She gave in initially but continued her nag. I quickly whisked her off to the colouring section and handed her a sheet of a paper with a puppy on it. She happily scribbled with the crayons and she started settling down. She started to gel with the set up. I took her to the dais where the kids were dancing. A grown up girl ruffled her short hair and she found immediate affection in her. Probably, felt that a friendship was in the offing.

I had to pull her back from her brimming enthusiasm and made her sit with me as some programmes were to start. I checked with her if she wanted to sing a song or two and readily agreed. I had to tell the audience that she had just sung ‘nanha munna rahi hoon’, though am sure people would have guessed that when she pumped the air while crooning ‘Jai Hind, Jai Hind’. She got a huge round for her short performance and a Crossword voucher (which we later used for books, her favourite).

It was lunchtime thereafter. We got a few pictures taken at the venue and headed for the lunchroom. I got a place, made her sit by herself, explained her not to move out and that I shall soon return with the food. I ensured she was seated close to the bain-marie so that I was in her sight. I fed her, had my food, introduced her to some smiling souls, hailed my cab and headed home.

It was a fun filled and satisfying day as I got some alone time with my child for the first time! This also came with a cherry on top. A few days later a friend told me, “dude, while my wife and I were struggling with our kid, you got your daughter alone. You are a superdad”. Well I liked the compliment but am no superdad. My dotty is a supergirl.