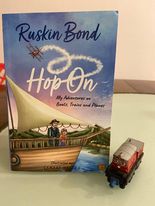 Title: Hop On – My Adventures on Boats, Trains and Planes

This book is a special treat for the youngest readers to be introduced to the rich world of Ruskin Bond. A delightful read as the master storyteller, the child in this book takes your little one on the rides on land, water and air. The illustrations by Samrat Halder add a beautiful layer allowing the child to visualise the characters, their dressing style and the modes of travel vividly and with ease.

The story draws us in with young Ruskin Bond’s dream of a toy train journey, being interrupted by a loud raven, after which as he sits down, promising to pen down some eventful journeys.

The first story whisks us into the air, as Bond regales us with his first aeroplane ride that left him with shuddering knees and a distinct queasy stomach! The story introduces the Tiger Moth, a 1930s British biplane designed by Geoffrey de Havilland. As the plane makes its wondrous journey through picturesque sights, the poor boy has to be cajoled by his mother to even open his eyes and look below. The illustrations add the icing to the cake as we peer out from the Tiger Moth as well.

The second story sets sail for his maiden journey on water on an Arab Dhow. As the boy gets readied by the Ayah, the cook Osman has cooked up not just breakfast but tales of man eating fish and those that morph into maidens! So while on the journey with a bustling crew with the sun glinting sternly and occasional splashes of sea water, the boy is quite delighted to have his feet planted firmly on the ground again at the end.

Imagine going to school by train. Almost brings in that Hogwarts Express idea. The third story is an interesting train journey as Bond takes the train to his boarding school in Shimla, but ends up with a completely unexpected adventure!

Do not miss this lovely little book that will allow your young reader to foray in to the experiences of the prolific Ruskin Bond. Recommended for ages 5+

Beyond the book, exploring history, transportation and more…

Visit the museum online , check out aviation history and then maybe add some Biology and look at pictures of the Garden Tiger Moth.

Trace some routes from history It is speculated that early Arab traders who visited the coast of Malabar for export of spices, taught the techniques to Kerala carpenters, so that they could build the ships here and transport spice loads from our coast, especially for the good timber in the Kerala forests, the availability of good coir rope, and the skilled shipwrights.

Did you know the Kalka–Shimla railway which traverses a mostly-mountainous route from Kalka to Shimla was built between 1898 and 1903 to connect Shimla, the summer capital of India during the British Raj, with the rest of the Indian rail system? This meant that twice a year it was necessary to transfer the entire government between Calcutta and Shimla by horse and ox drawn carts!

This book is a marvelous adventure for the youngest readers who are privileged to have such an eminent author have something perfect for this age group! Do check it out.

If you liked this review and would like to buy the book from Amazon (kbc affiliate link),