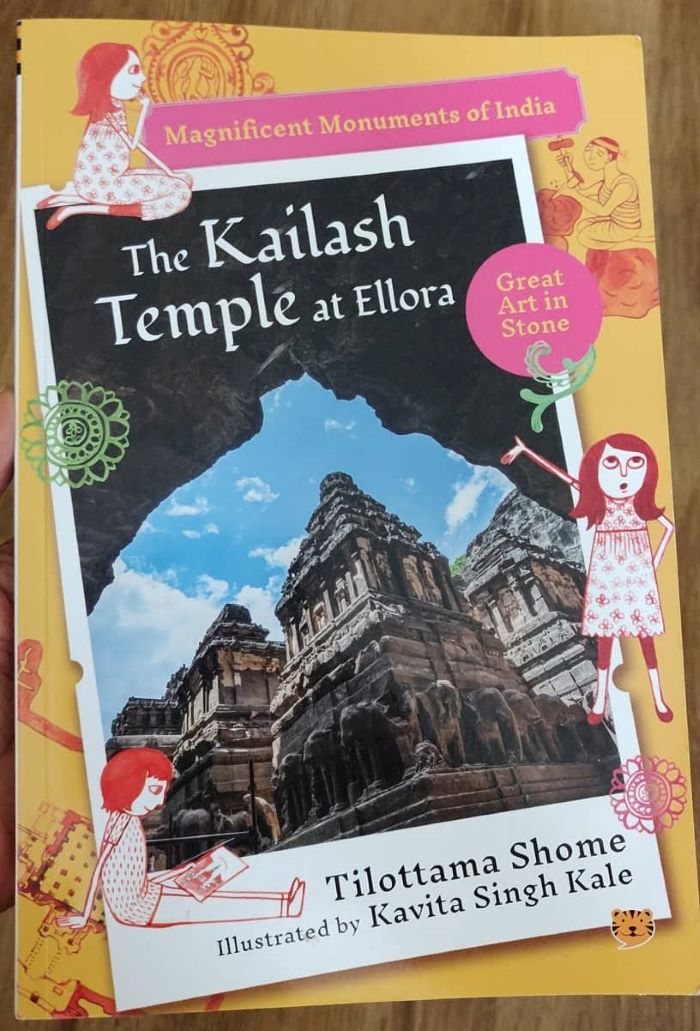 Title: The Kailash Temple At Ellora

This is a Book Review written by my son Medhansh Dwivedi who is 11 years old and loves History as a subject.

Author of this wonderful book is Tilottama Shome who has also written ‘Taj Mahal‘ for the same series. This book is illustrated by Kavita Singh Kale who also happens to be the illustrator for ‘Taj Mahal’

This is a non fiction book.

As the name suggests the book is about Kailash Temple at Ellora. The author explains in the detail about the architecture of the temple, who built it, how many years it took and it also tells us about gods and demons in their stories.

Let me share some factual pieces from the book;

Did you know about Vastushastra? It simply means science of architecture. The first mention of it was in Yajurveda which is an ancient Indian text written almost 4000 years ago. Vastushastra has an interesting legend, it describes how Vastupurusha was created. When Lord Brahma created the universe, he also created the first man and this man would keep growing and growing as he was no ordinary man. He grew till his shadow covered the earth. The other gods got worried and prayed to Brahma to stop him from growing as it might consume the whole earth. Brahma then asked the other gods to help too. 45 gods including Brahma, pinned Vastupurusha in the North Eastern direction. Brahma however pinned him in the center. When he pleaded for mercy, Brahma said that I will make you immortal and you shall be worshipped by all mortals and just like that every Hindu temple is made in North eastern direction. There are 45 imaginary squares in the temple and each square depicts ones of the gods. For example, Agni is one grid, Brahma is in another and like this 45 gods are in 45 imaginary squares. This is how Vastupurusha became Man of Architecture. In this book you will find all the details about these squares and more such stories.

In any temple construction, there were three people, first there was the donor who was called Yajaman. He would be a rich person who would give land and money for the temple construction. Second comes the Sthapaka or the priest who would instruct on the worshiping rituals and then the third would be Sthapati or the architect who would be responsible for the design and actual construction. The Kailash temple was build with the help of King Krishna the first, of the Rastrakuta Empire.

What I loved about this book is the descriptive architecture of the temple which is explained here. This also helped me understand a lot about Hindu mythology and also the base architecture of other temples. I enjoyed reading about various legends like Goddess Durga killing Mahishasur, Goddess Parvati who was earlier Sati and how she burned herself because her husband Shiva was not invited by her father in a ritual where all other gods were invited.

You must read my review on Taj Mahal by same author Tilottama Shome which depicts Muslim architecture while Ellora is all about Hindu architecture. It will be a good understanding of two different types of structures.

I recommend this book for 11 to 15 year olds because this is quite detailed book and one should have interest in reading about History, Mythology and Architecture. Younger kids might not be able to connect however older ones would certainly find the facts enjoyable to read.

Hope you enjoyed my review and read this book and share more.