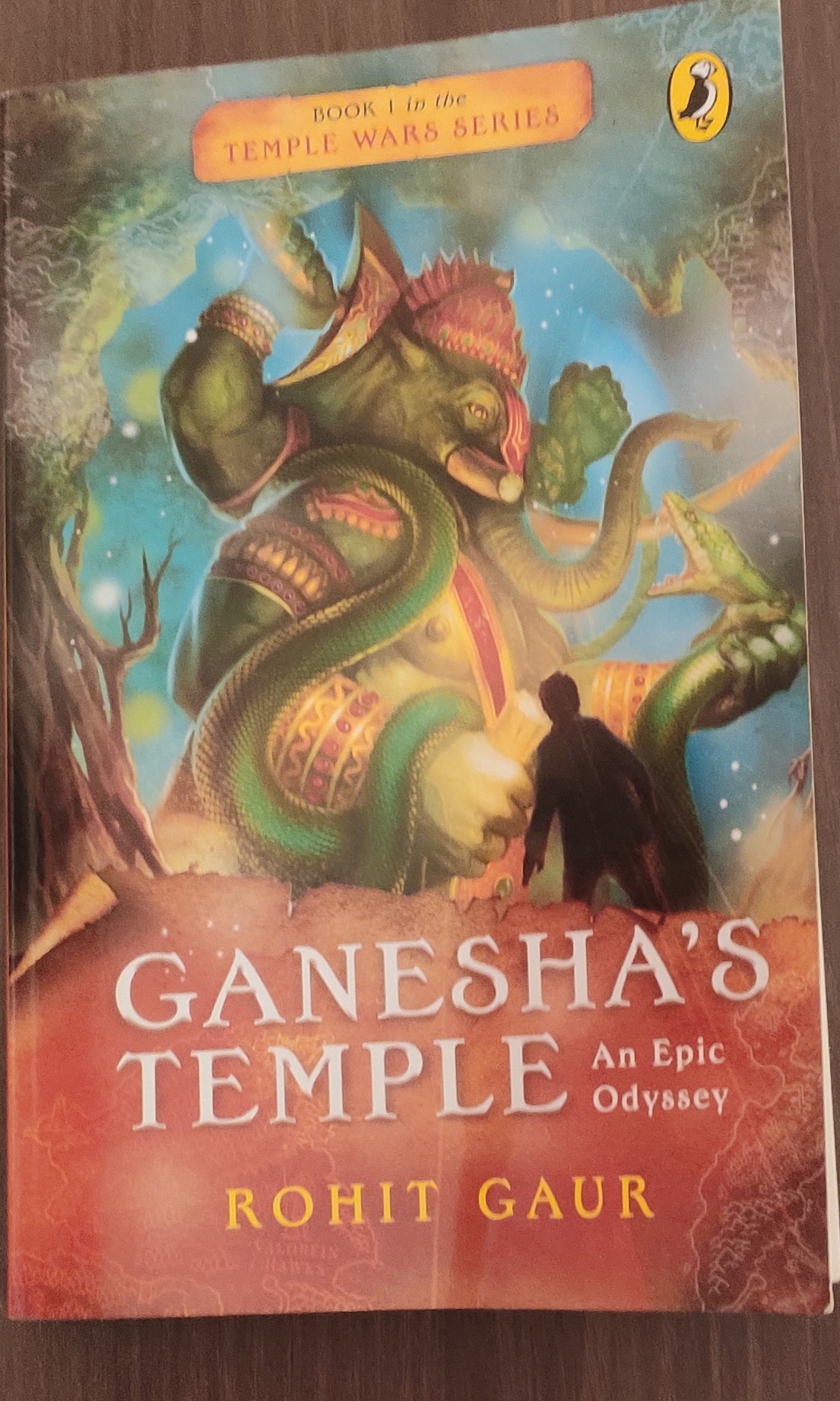 The Ganesha’s Temple by Rohit Gaur is his first book in the Temple War Series and is a brilliant blend of Hindu mythology, adventure, fantasy, fiction and spirituality.

For my almost nine year old, Miss. M, who calls Lord Ganesha as her best friend, this book was simply unputdownable. Just as we received the book, Miss. M buried herself into the book and she was done with it in a day’s time. When asked how the book was, pat came the reply,

While she was done with the book, I wasn’t and I wanted to reply to her after giving the book a complete read.

With that question lingering in my mind, I started reading the book which at first, looks like a page from everyday life that revolves around this teenage boy Taran and his family. Starting out with a peek into sibling rivalry and taking us through the colours of Ganapati visarjan, the story efficiently unfolds its adventure and fantastical elements with a quick turn of events. Soon enough, Taran finds himself charged with a mission by the Lord Ganesha himself!

As someone who has never been entrusted with any responsibilities till then, Taran feels incapable and doubtful about his own capabilities even when Lord Ganesha affirms that he was chosen on purpose and that he’s a God-gifted child.

‘But most importantly, faith means believing in something without proof that it is true.’

It’s this affirmation from Lord Ganesha himself which makes Taran pursue this mission in what looked like a mystical and mythical adventure to the Veiled Lands. He fears, he flails, but faith in Lord Ganesha’s words to have faith in himself, keeps him going and emerge victoriously.

He puts up a brave front to rescue his family from the hands of Preta back in Bare lands. He discovers his innate talents, magical powers and unleashes the power of faith as he fights against the evil Naga armies, other mythical creatures and Vritra, the mightier villain who would do anything and everything to reach the Gateway of Moksha in the Veiled Lands.

The quick turn of events, gripping encounters, a massive mission and a conscious and brave choice as an element of surprise at the end of the story make for a great read. Now we are longing and looking forward to the next book in the series!

So after the read (by then Miss. M had read at least 3 times), I asked her what she thought – whether it was a real story and without even an inkling of doubt she said, “Yes it is!”

I leave it to her to read and ruminate.

Ganesha is right when he says, “We often create barriers in our hearts based on our experiences, our impressions of the world, our perceptions of ourselves. We’re often harsh on ourselves…” and “But most importantly, faith means believing in something without proof that it is true.”

This book makes for a great way to introduce Hindu mythology to tweens and young adults who prefer contemporary narratives. It also has undertones of spirituality and more to look out for those who prefer a touch of classic. This book is a brilliant blend when I say the author Rohit Gaur has carefully crafted the elements of mythology and fantasy in this epic odyssey, making spirituality more approachable.