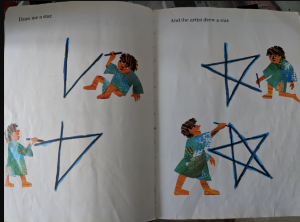 Book: Draw Me a Star

Draw me a star is definitely a story book like I have never read before. Being inclined towards art and creativity I do admire the simplicity and approach Eric Carle took to portray an artists imagination. However, there may be some controversies attached with this story book and in some places it is banned.

I looked for books written by Eric Carle because his ‘The Very Hungry Caterpillar’ (read review here) was such a big success in our home when my boy was a baby. Now that my boy is five, I wondered if Eric Carle wrote even better stories for this age group.

The story is about an artist that draws picture after picture and brings the world to life. The words of the story simple enough that my five year old boy was able to read the book. I could tell that he did not appreciate the deeper meaning of the story as I did but it still was an enjoyable read for him. He loved the beautiful and realistic illustrations. He too wanted to pretend he was an artist. “Mumma, I can draw star.” He said.

More on why the book is supposedly controversial. It supposedly has some religious connections that are questionable in a certain religious faith. Not going in detail. Also the artist in the story draws a picture of a tree and then a picture of a man and woman without clothes. The picture of them is not explicit and my child barely reacted to it. Just the “How come they have no clothes?” But I did not give this point too much importance. It is still a good read with great illustrations.

If you like the review and would like to buy the book from Amazon (kbc affiliate link),