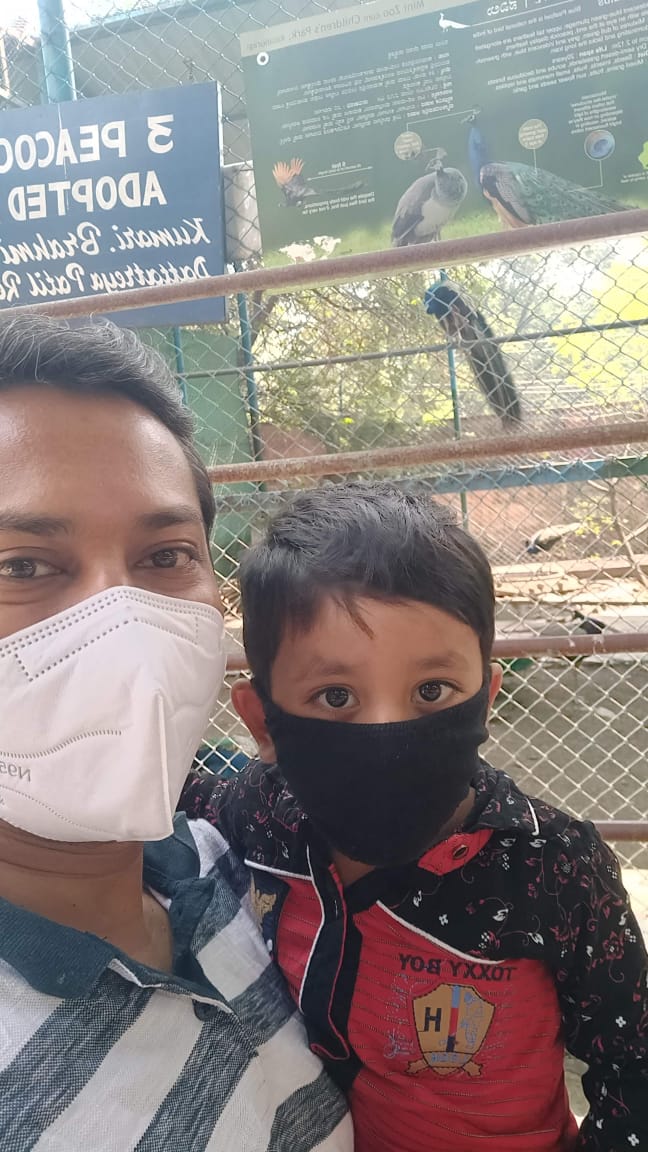 I’m posting this on behalf of my husband Anand for the kbcAdaywithDaddy contest.

It was Sunday morning and Atharva woke up as usual at quarter past seven. For a change I decided to assist him in brushing his teeth but he was reluctant because it’s his mom who usually does that. I promised him to order his favorite breakfast idli vada and so he let me help him brush his teeth.

And then until the order arrived we went for a stroll along with his little sister Shrida. We stay in the quarters situated in a medical college campus, myself being a doctor. We then came across the anatomy museum the windows of which are made of glass and can be seen through from outside. While Shrida played with sand and flowers we peeped through the window pane, Atharva is fascinated and loves to look at the human skeleton hanging inside.

We went back home and after a quick shower sat down for breakfast. Atharva Went straight to the dining table chair with a broad smile and picked up vada, finishing off the outer layer first and then the rest of it. After breakfast I decided to take him to the Zoo. Atharva is crazy about animals and had never been to a Zoo before.

Atharva’s mom gave him a small basket with a water bottle and some cookies while leaving. He hopped on my bike, this was the first time I drove so far with him on the bike. On the way he was keenly observing the surroundings. Midway he suddenly uttered JCB! so loudly that I had to stop driving only to realize that he spotted one on the road. He has a strong affection for JCB. In ten minutes we were at the entrance of the zoo.

At the start there were birds, he liked peacocks in particular. He was amazed with eagles and the Emu too.

Then there were crocodiles, he tried to emulate the way the crocodiles opened their jaws. He recognised each and every animal there be it the wolf, deer, black buck, snake, tortoise, cheetah, monkey etc. He was fascinated to see the animals in real which he used to daily spot in books and on TV. One animal he couldn’t recognize though, it was the porcupine. I tried explaining him what it is and how it’s spikes are useful to it.

While we went further suddenly we heard a shrieking sound of a child and then there was some commotion. Few monkeys were seen outside the cage. Atharva started jumping to see them. The monkeys got agitated looking at people shouting and teasing them.

The nearby authorities came there and clarified that they were not belonging to the zoo, the monkeys soon left. We were famished and sat on a bench, ate the cookies and drank water.

There was a park area for children to play. Atharva ran to it and played the slide, he enjoyed the swing, merry go round and the see saw too. It was time to leave and I had to literally force him out of the zoo. We went back home.
Atharva was very excited to have visited the zoo. I was happy I spent a day out with him.