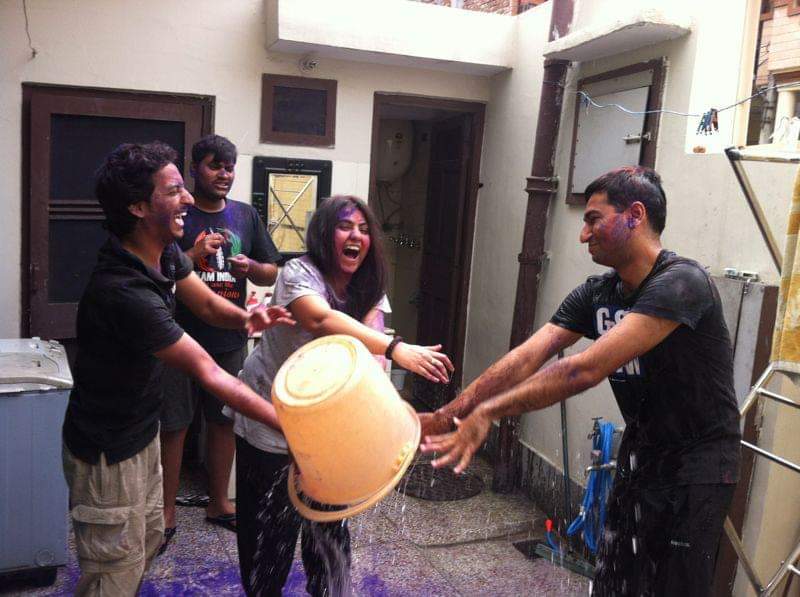 This is my entry for the colourful #kbcHoliHai Contest !

Holi, a festival, that takes me back to the memory lane of my birth town
Shamli (UP).. We were a very close knit family of cousins living very close by.

The early morning would start with rushing to the gusalkhana (bathroom) and getting the balloons ready in a bucket, as many as possible of course. Then reaching the terrace which was a joint terrace for us and our immediate neighbors Anu, Tanu, Shenty bhaiya, Chintu, Priya, Ruby, Shalu didi (we’re still like family to each other). Lucky we all would start playing with gulaal and would make sure the balloons were saved for the opponents aka targets. Everyone would come all prepared with their pichkaris and buckets full of water-filled-balloons as if there was a set target to be achieved and the time was running out (the rule in the colony/town was, no one played holi beyond 12pm).

A huge terrace of my friends Guddan and Vishu was right opposite. They had a huge house (which means they were entitled to the biggest terrace I’ve ever seen in my life, and also their terrace was a level higher and was spread almost the entire length of the lane). Now the madness would begin, it was like a war zone. We would throw balloons filled with color water at each other, including the people passing through the lane. This crazy war would continue till our families took  the crying and howling kids back. Hahaha. How much fun it was!

Today while writing this when I think about it, I wonder how we would lose
the game every holi (obviously because the opposition’s terrace was more than a level higher than ours), and still every holi we would go back with the same zeal to fight, with the very hope of defeating them one day. Then followed the not-so-good bath time where moms would be cribbing and yelling as to how to clean these little monkeys. And then, the treat of gujiyaas and chaat pakodi, followed by a peaceful nap. Life was perfect!

Today when I sit back and think, it was not them v/s us. It was life v/s us.
As our team often ended up having more balloons thrown at our terrace which wouldn’t burst on hitting or even as they missed the targets, we had more fun!

I’m also feeling a bit sad , because I have never really played holi after
that. Also how I don’t have any photos from any of those holis I played as a
kid. But that’s how it was then.. Spending more time creating them and not busy capturing them.

Nevertheless, this is us a few years back.