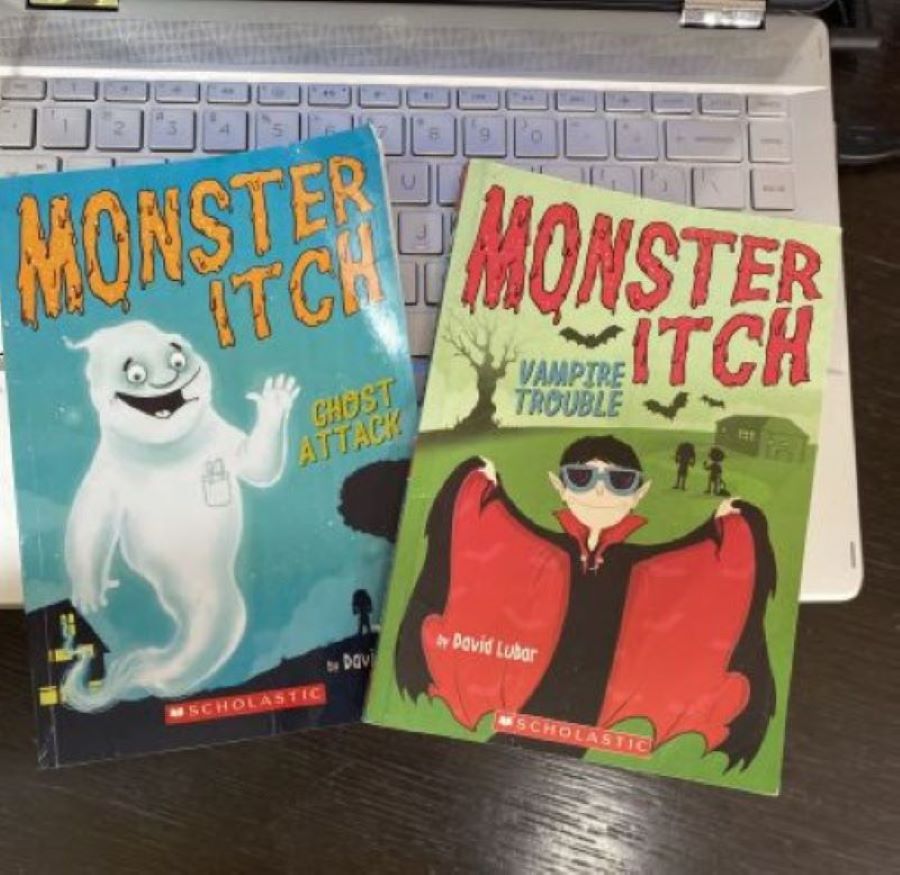 Divit, my 8 year old, loves to read all things spooky when he is not reading his Diary of a Wimpy Kid or Roald Dahl. He recently read these two books which he wanted to share with you all. So here is his mini review of the two books from the same series – Monster Itch!

Alex and his cousin, Sarah, are on holiday at their grandparents’ house this weekend. Unfortunately, there’s a ghost which haunts the luxurious house! Even worse, Alex is allergic to it! Yikes! It was the ghost of the Great Joshua Thistle! Everybody thought Joshua Thistle had robbed a bank, but he hadn’t! Will Alex and Sarah be able to clear his name?

Alex needs to score fifty home-runs in kickball in a month. He had forty-seven. He had to get that fifty. He just had to. But something was stopping him. Do you want to know what it was? I can hear you saying “yes!”

It was – and this will probably make you jump – It was a venomous, vicious vampire named “Pepper Moroaica”. Now, Pepper is a pretty funny name but the surname is no laughing matter. The surname “Moroaica” actually means “female vampire.” Alex is allergic to the vampire – whenever he comes near her, he lets out a bloodcurdling sneeze. And what if Alex sneezes on sports day? His mother will make him skip recess. THE WORST PUNISHMENT EVER! AND JUST FOR HAVING A SILLY ALLERGY!?!?!?! No, that can’t happen.

He finds a way to get rid of the vampire and who knows, maybe he’ll make fifty home-runs! You have to read the book if you want to know 🙂

You can also order these books from this special kbc-scholastic link!

If you liked this review and want to buy Monster Itch-Ghost Attack and Monster Itch-Vampire Trouble from Amazon (kbc affiliate links),