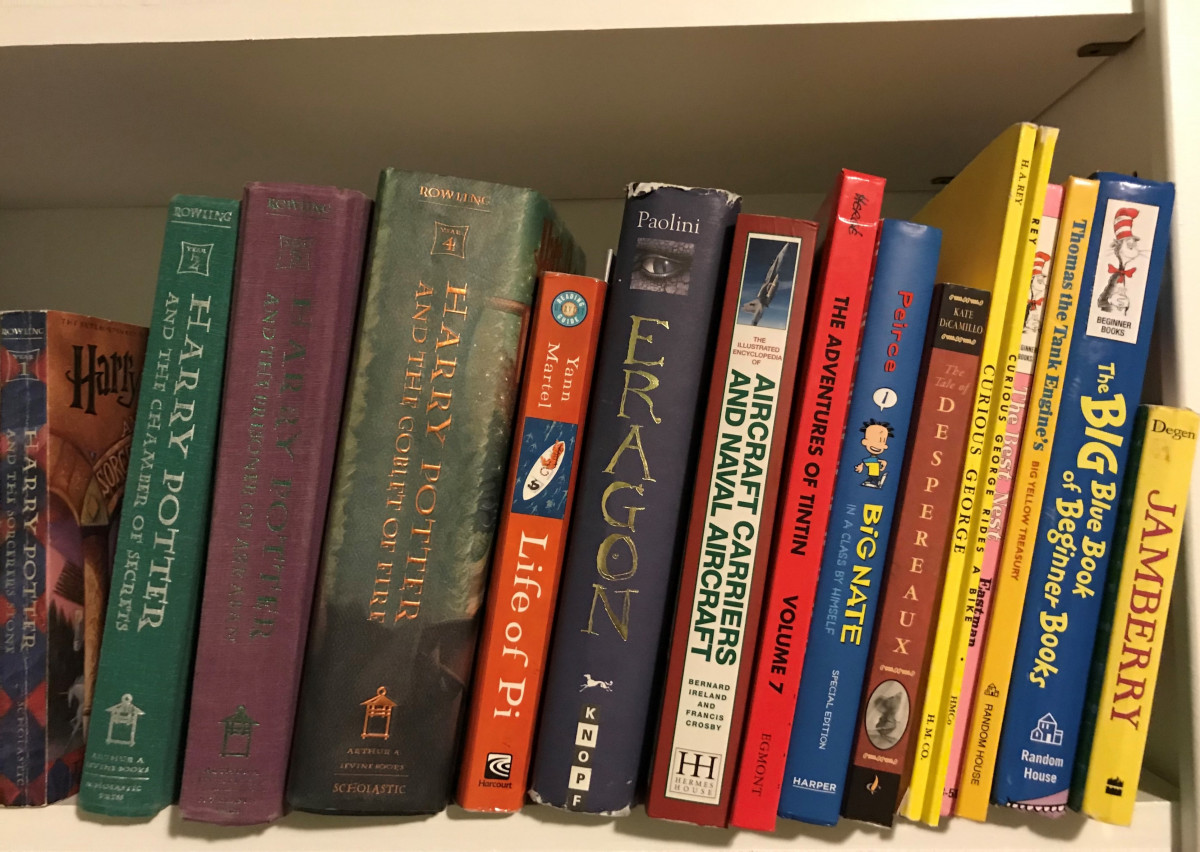 Reading was a big part of growing up for my two boys. Even though they are 14 & 18 now, they are very much attached to their books. Here are a few of our favorites. The age ranges are suggestions as every child reads at a different pace.

Pat The Bunny by Dorothy Kunhardt
Goodnight Moon by Margaret Wise Brown & Pat Hancock
Good Night, Gorilla by Peggy Rathmann
Brown Bear, Brown Bear, What do you see? by Eric Carle & Bill Martin Jr.
Freight Train by Donald Crews
Big Fat Hen by Keith Baker
The Itsy Bitsy Spider by Iza Trapani (our bed time song)
Tails & Fuzzy Yellow Ducklings by Matthew Van Fleet
Working by Helen Oxenbury
My Aunt Came Back by Pat Cummings
Machines At Work by Byron Barton
The Wheels on the Bus — Leap Frog Lift a Flap book (one of many)
Big Red Barn by Margaret Wise Brown
While You Were Sleeping by John Butler
Jamberry by Bruce Degen
Five Little Monkeys Jumping On The Bed by Eileen Christelow
Go, Dog. Go! by P. D. Eastman
Stop, Train, Stop! by Rev. W. Awdry (one of many Thomas books)
Ten Little Ladybugs by Melanie Gerth
The Big Blue Book of Beginner Books by P. D. Eastman
Maisy Goes On A Plane by Lucy Cousins (one of many by this author)
Dr. Seuss’ ABC & The Foot Book (among other Dr. Seuss books)

The Fire Cat by Esther Averill
More Spaghetti, I Say! by Rita Golden Gelman
Mr. Putter & Tabby Fly The Plane by Cynthia Rylant & Arthur Howard (one of many in this series)
Henry & Mudge series by Cynthia Rylant
Detective Dinosaur Lost And Found by James Skofeild
The Truck Book by Harry McNaught
Curious George by H. A. Rey (one of many by this author)
The Adventures of The Magic School Bus
All Aboard Airplanes by Frank Evans
Faster, Faster, Little Red Train by Benedict Blathwayt (one of many)
Take A Flight by Peter Kent


[Note from Team Kids Book Café: For your convenience, affiliate links (MARKED IN PINK) to some of the books have been added to enable you to buy the books from AMAZON, should you wish to! A very small amount of money comes to kidsbookcafe.com when you purchase a book via the amazon affiliate link provided (at no extra cost to you!). Do let us know if you’d like to buy some other children’s books that are not listed here yet, by writing to asha@kidsbookcafe.com.]﻿