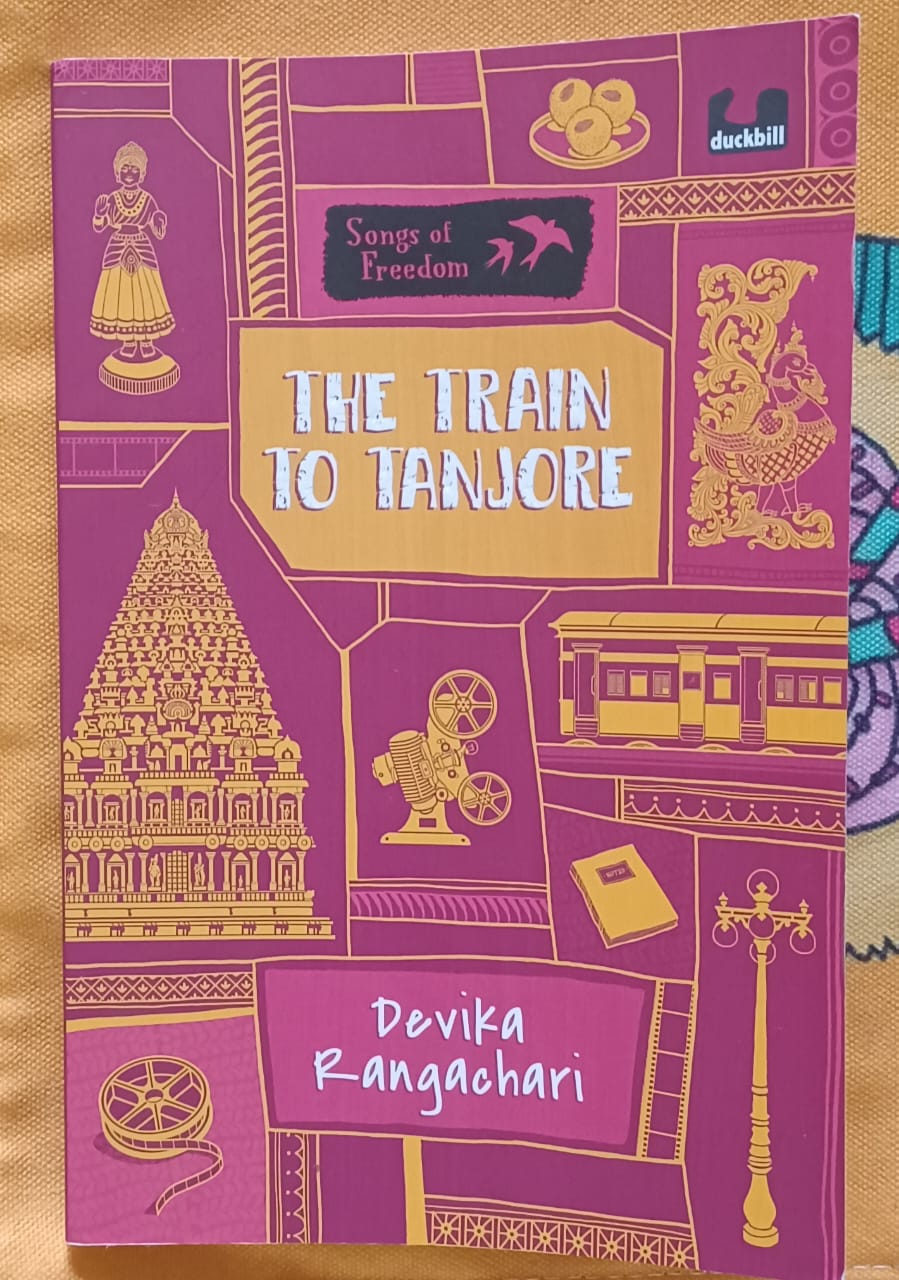 Title: The Train to Tanjore (Songs of Freedom series)

Dr Devika Rangachari is an award winning writer whose historical fiction books for children have been read, reviewed and recommended by our kbc community members. Her acclaimed books include Queen of Fire, Queen of Earth, Queen of Ice, 10 Indian Monarchs whose amazing stories you may not know.

What’s unique about The Train to Tanjore is the fact that this book is based on the author’s father’s memories of his boyhood in Tanjore.

The book is a slice of history blended with a slice of fiction. There’s the familiar scene of people gathered around the radio for hearing the BBC News, and a hark back to the days when theatres as quaint as Rajaram Electric Theatre existed, as did the Manargudi Railway Station.

Those were days when eating out for a Brahmana was considered a sin and all the treats from sambar to coconut laddoos, were prepared lovingly by Amma. And when it was a big honour to become a big boy at all of ten years, so you could walk with your father to the library.

That’s where our protagonist, Thambi, is introduced to the British, the atrocities committed by them, and the non violent movement by Mahatma Gandhi.

Thambi’s twelfth birthday was heralded in, to the cries of Quit India!

The treat was a movie at the Rajaram Electric Theatre. But Thambi’s and Appa’s minds were far, far away from the story of Lord Vishnu. World War II was going on and rumours of the Japanese bombing India were rife. So the big question was: Would the Japanese attack India?

Thambi was fired by Mahatma Gandhi’s Quit India Movement and inspired by his vision of refusing to obey the British. But Thambi’s father was of the opinion that the family must not be involved in anything. He naturally wanted to play safe. Not Thambi… He not only collected his close friends and joined a secret meeting, but also ended up almost getting caught by the police.

Thambi now started leading two lives: the bright student heading for a scholarship, and the other dangerous life of a mental and physical commitment to Mahatma Gandhi’s Quit India Vision.

So it’s no surprise that Thambi discovers the ‘Quit India Press’, a single page leaflet, that’s guaranteed to land him in trouble double quick. Not only does Thambi read and devour each word, he ends up taking on the daring task of spreading the word by distributing these leaflets. And so it happens that this explosive material ends up in his big John Bartholomew Atlas!

Night time reading for Thambi is now all these tucked away leaflets, which detail and impress our young protagonist, on how the British have destroyed India. Well, next day, the leaflets are smuggled in the school atlas, and scattered near the school bathroom, catching everyone’s eye. After that, all hell breaks loose!

Will Thambi get caught? Will he escape and contribute to the Quit India Movement? You’ll have to read the book and join our young Thambi as he fights for his vision for the future to know more. He keeps abiding by the one truth he knows… Gandhiji and his friends would come out of prison, and fight for independence over and over again, until the country was free.

What is exceptionally memorable about this book is the old world setting, which as the author reassures us, is more fact than fiction. Very few books on Quit India Movement are set in princely Tanjore, among the aroma of coffee and the excitement of an Electric Theatre. A charming treat!

You can read the reviews of The Chowpatty Cooking Club (I particularly enjoyed this book) and That Year at Manikoil on this website. You can also explore the other newly released books in the Songs of Freedom series here.