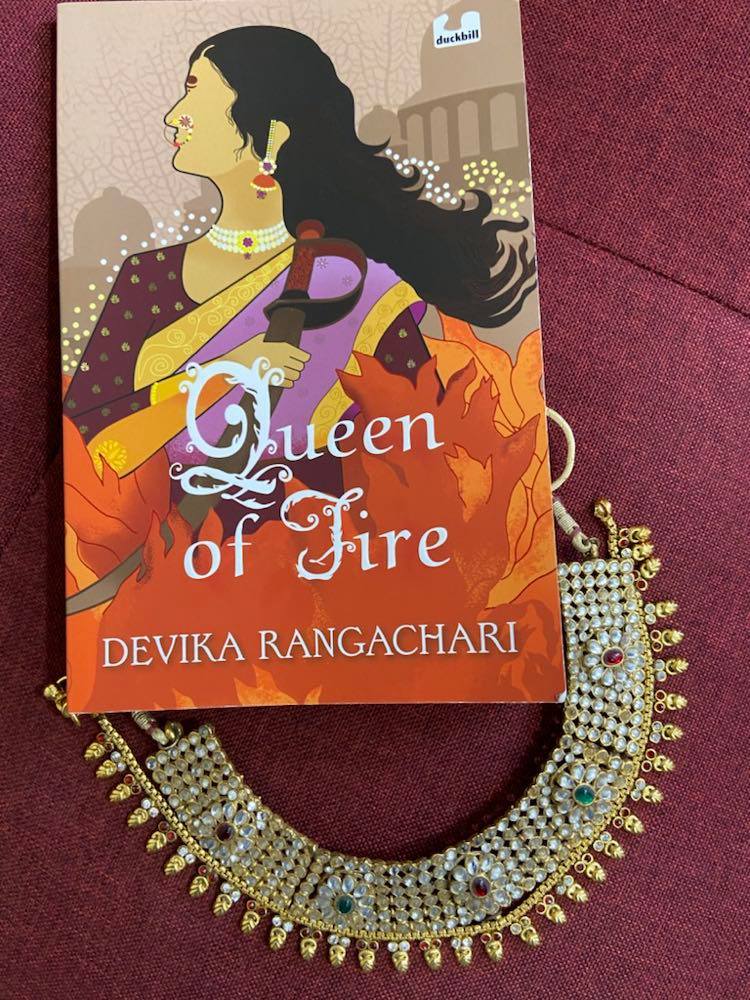 Age Group: 12 years+ (this book is simpler than the previous two in the series, so apt for advanced 11 years+ as well)

A Tale of Courage Under Fire Indeed

Queen of Fire by the brilliant historian Devika Rangachari is the third in the ‘Queens’ series and unfolds the tale of the feisty, bold Rani Lakshmibai of Jhansi. I was intrigued when I got it as unlike the other two queens Dida of Kashmir and Prithvi Mahadevi, who were lost in the pages of history, Rani of Jhansi was a rather well known queen. I wondered what else could I discover about her…

The story begins with the adoption ceremony of the young new Prince by Gangadhar Rao and Rani Lakshmibai in the presence of Major Ellis to ensure that a legitimate heir to the throne of Jhansi was established. As the King passes away the very next day, the young queen is acutely aware of how the last few years had quickly passed taking her from a very young girl to a wife to a mother to a widow and now the queen in rather difficult times.

As the betrayal strikes with Lord Dalhousie’s doctrine of lapse, Jhansi is taken over by the British governance allowing the queen a mere pensioned guest at the palace.

She soon realises she is just an ant in front of the elephant of a British empire, so she resolves to quietly but surely bite back hard and somehow get the little boy all she had promised him. Even as the queen continues to care and worry about her Jhansi, we see an unexplored relationship with this little boy who is completely in awe of his brave, brilliant mother…who is incredibly busy and yet always makes time for him.

I realised as I read this, that I had not given much thought to the boy who is often not thought of beyond being something slung over his mother’s back in the war.

As the well known Sepoy mutiny strikes , we go through the events that made the Rani a force to reckon with – at the same time we also realise that she was just a young girl with remarkable courage and willpower in extremely extenuating circumstances.

While the age old “mardani” name tag given by Hugh Rose may seem sexist, the book presents the human side of the Rani as a young queen with her own fears and dilemmas, her nurturing relationship and grooming of her step son and of course, her pristine leadership.

As always , the brilliance of Devika Rangachari’s writing exposes how History has always been “HIS”story – a narrative told from the male perspective taking away the many nuances of a wonderful, brave and compassionate leader.

Manikarnika was trained in horseback riding, fencing and shooting. She also received education, loved books, had access to a library which was extremely rare for women in that time. Consider how these turned out to be the major advantages for her as a woman leader. Do you think if more princesses /women had this skillset there would have been more queens as prominent rulers…?

The tales of those times extol Sati. She neither shaved her hair nor wore white like the typical women of the times. How difficult would it have been for her, as a widow, to take the throne, despite the fact that the British had actually passed a law that abolished Sati…?

The Rani of Jhasi was keenly in love with not just her Jhansi , but the populace. Her visits to take care of her poor and sick, across caste and creed, were undoubtedly absolutely path breaking. The fact that she created and trained an army of women and truly included and considered her people’s sentiments in the war times made her an empathetic and loved leader. What are the repercussions of not including half the population? What has patriarchy cost the world…? Imagine trying to save the wives and families of the very same people who were taking her kingdom away from her.

But we realise in her interactions with the son, how she is keenly aware of how she is a role model for her son. She constantly defines the thought process behind her decisions, on right and wrong, on war and violence as she continues to allay the little child’s fears. Consider the importance of these actions in leadership and parenting….

While a single young queen and men and women fought side and side for their precious little Jhansi, there was always the one treacherous, lazy person who would be the weakest link. Consider patriotism and selfish needs. How can we ensure our children think of what would be better for the greater good, for the country rather than their own needs and comfort?

You can read my review of the previous book, Queen of Earth, here.