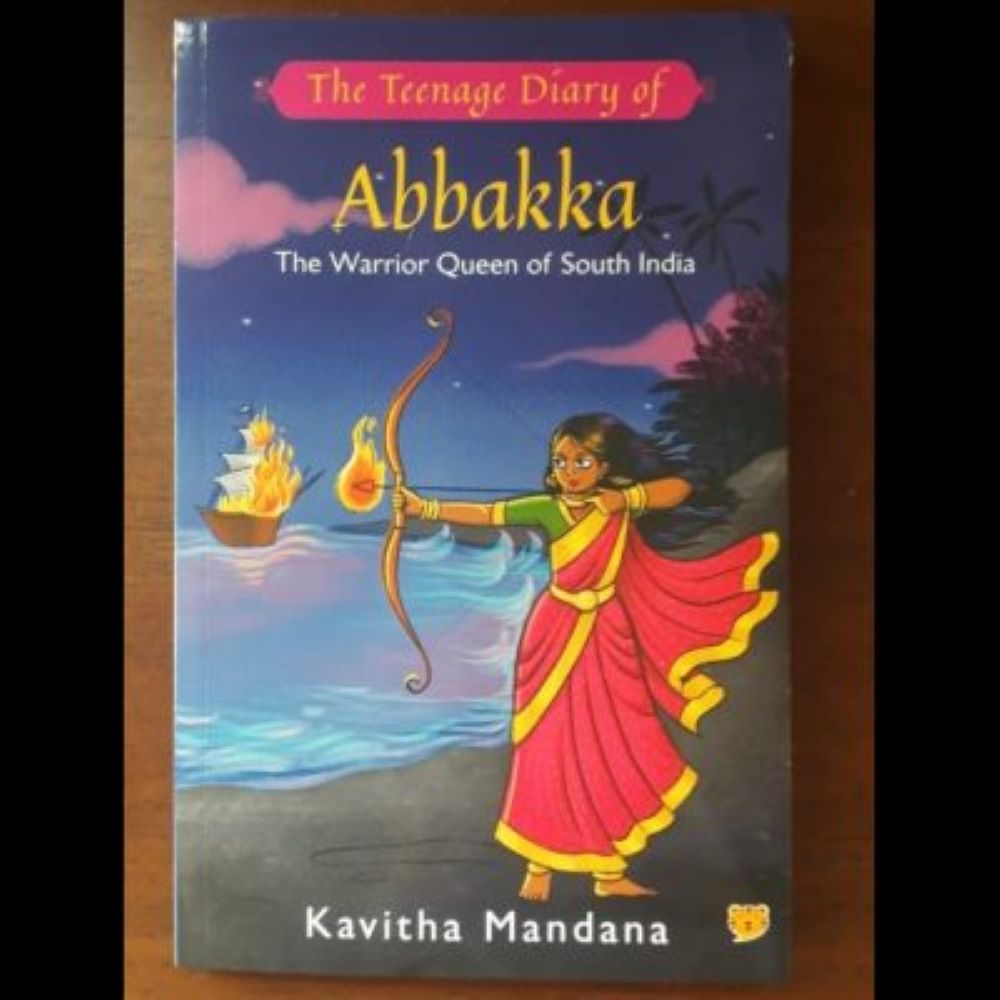 Title: The Teenage Diary Of Abbakka

I am posting this on behalf of my 13 year old daughter. She is an avid and advanced reader.

The Teenage Diary Of Abbakka: The Warrior Queen of South India written by Kavita Mandana is in the  historical fiction genre. It is about a young teen, Abbakka the 3rd. She grows up knowing one day she would be crowned queen of the kingdom of the Chowtas which for many years have been ruled by women like her grandmother, Abbakka the 2nd and her mother (Amma), Rani Tirumala Devi.

Abbakka is your typical warrior princess in training, a skilled archer, fierce, courageous, witty and embodies an easily likeable character as the protagonist. A girl thirsty for any sort of adventure as she sets out into dangerous missions to track down spies in her seas. She accompanies her mother whom she has a strong bond with in stopping the firangis (Portuguese) from capturing their precious pepper crop.

As evident from the title of the book it is written in a diary format through the eyes of the princess herself.  It is written in an easy to understand manner which I personally found a little too simple. But then that is just my personal view because I understand it is a diary of a young teen and her simple observations. However what I did like about it were the historical terms and words used  to bring in authenticity as well as quick history lessons from the story.

As someone who is  an enthusiast of  history and loves to learn about different cultures, I enjoyed reading the historical aspects and it urged me to further research that period.

For example in one chapter “March 10th, Struggling to stay awake” she explained, the Bhoota Kola which is an annual ritual dance to honour their family’s guardian spirits. The author brilliantly described the worship of ancestor spirits  and the incident of a man going into a trance by letting spirit of ‘Darage’ enter his consciousness. It was most interesting to be drawn into the world of oracles and prophecies which adds to the destiny aspect.

I felt like the plot was slow paced and certain incidents were dragged on for too long as an unnecessary amount of diary entries. Some of which were not integral to the main plot or contributed to the developing plot. It also falls short to create a better relationship between the reader and the other characters that populate the story since that connection via the princess was missing.

I would have also loved to see more action in the book especially because the plot revolves around the feud with the firangis and involves lots of spying. I wonder why the author did not develop further Upendranath and Abbakka’s budding romance. It appears that both of them were head over heels in love and it could have been a great way to strengthen the reader’s connection with the characters. Of course keeping a balance with the main plot by not getting carried away with too much romance. I think towards the end of the book it started to pick up. If only the book would have maintained that throughout, it would have been much better.

How can I forget the ending! The last few diary entries were  wonderfully written and probably the best part in the entire book. It was satisfying yet bittersweet, capturing how a teenager (as a teen myself) would react to that particular situation and finally I made a connection with Abbakka and empathized with her.

I still do feel like some others would favour this book much more than me so if  I had to recommend it, I would do so to those who have an interest in Medieval India and enjoy researching historical periods.

If you liked this review and would like to order the book from Amazon (kbc affiliate link),