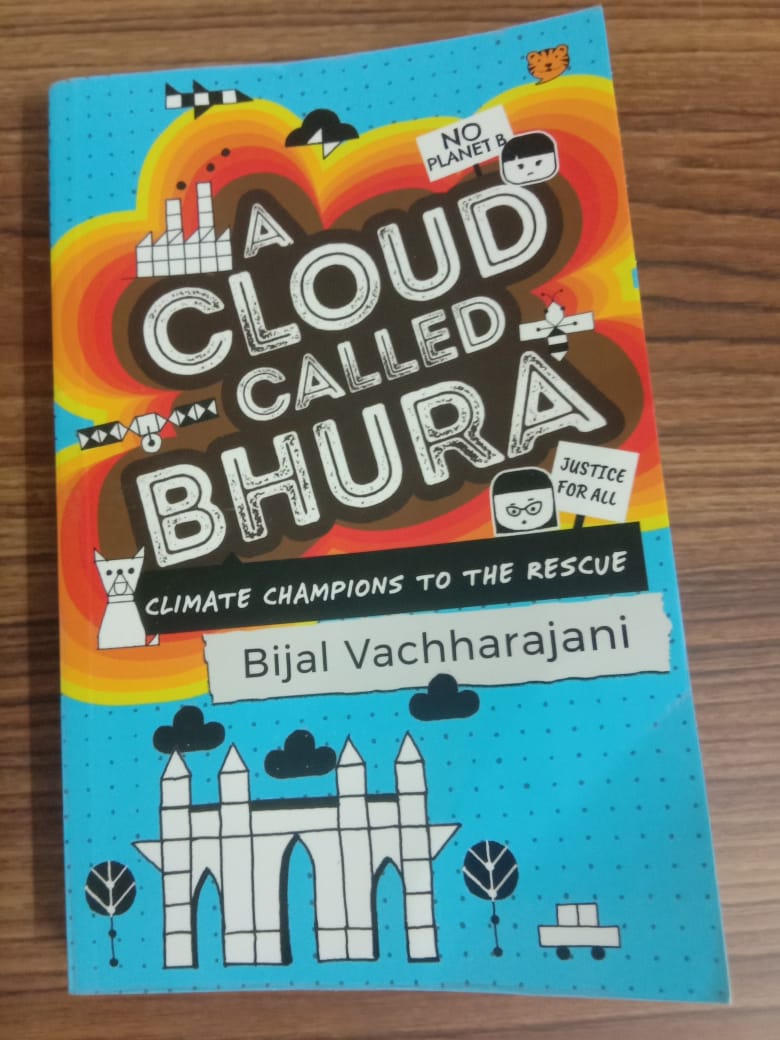 Climate change has become a hot topic for discussion on many forums across the world today and rightly so because in order to solve a problem we must first accept that there is a problem. Discussing it seriously and sincerely becomes important.

Bijal Vachharajani’s book, ‘A Cloud called Bhura’ depicts this situation in a fun way through a story ideal for 9-14 year olds. It’s a story about four friends Amni, Tammy, Mithil and Andrew who wake up one morning to find the sky taken over by a massive brown cloud called Bhura. No one has a clue to where this cloud has come from and what is it made up of.

The national news channel Khabar Bhayankar’s lead anchor Vaatodiyo Bahuche starts reporting this incident on TV and it is he who names the cloud Bhura Cloudus owing to its deep brown colour. In a matter of time Bhura becomes the talk of the town. Politician Motabhai calls it an enemy ploy to defame his sarkar; while Scientists Dr. Bidisha Mehta and Dr. Vidisha Mehta (twin sisters) are confused and trying their best to find the what and why related to this toxic looking cloud.

Common people of the city like these four friends and their families are worried about the cloud and its impact on their lives but initially as Bhura is not creating much trouble each one of them is shown to carry on with their lives and its worries.

Trouble starts brewing when Bhura starts creating trouble for people on a daily basis. Rising temperatures, cancelled flights, large queues of people in hospitals, patients with breathing troubles showing more severe symptoms etc. creates pressure on the administration to act. On one hand Motabhai, wants the situation under control, while on the other hand the twin sister duo Vidisha and Bidisha seem to have some ideological differences cropping up amongst them apart from the Bhura problem at hand.

A time comes when the Bhura trouble leads to water and electricity cuts in the city and even other places reporting such phenomena. People are fed up of seeing the brown toxic gas filled skies and one day when Tammy takes her Nanu for a walk, he succumbs to breathlessness due to environmental toxicity and is bedridden. Everyone is forced to wear a mask when out and life is not same. Many birds and animals are reported to be fleeing the city. Even Mithil’s pet dog Chapati (loved by all friends) displays a weird behaviour. Mithil’s mother works for a newspaper and it’s due to her that Amni, Mithil and Tammy get a chance to attend a very important meeting about Bhura at a five star hotel. The meeting is just about to begin when thousands of insects attack the venue (unusual insect behaviour due to rising temperatures) causing a stampede. Later the children meet Dr. Vidisha Mehta for the first time.

The situation starts worsening by the day. With dust storms creating more mess and with day to day survival becoming difficult especially for Tammy. A small rift gets developed between her and Amni for a while.

All this while Motabhai (still not accepting the report that pollution has caused Bhura) has been thinking of shrewd ways to save his political career and name and finally finds a solution to nail the Bhura problem. It is thus decided that Pavan Kumar, the famous film actor will play a super hero and in an event organised on the Zaveri Skyscraper (a famous building), he will use a machine called SUK – UP9 to suck Bhura and finish the problem with much fanfare.

Unfortunately the machine fails and leaves the city with an expanded Bhura.

Rainy season starts and instead of giving relief its toxicity scales. Another unfortunate incident happens.Tammy’s grandparents are stuck in their apartment in a flood like situation and there is a heart touching account of how they get rescued by the kids. Looking at the gravity of this bad situation Amni’s parents decide to leave the city for a safe place. But Amni is in no mood of leaving her city or friends.

Enough is enough now and the children decide to take things in their hands. Operation Bhura Cloudus is planned initially in Amni’s bedroom and thereafter becomes a full fledged campaign. Thousands of children are roped into the movement through various school and student networks and a rally is carried out. The children want to take a decisive step in not only solving the Bhura issue but also want to ensure that climate change is taken seriously by all adults. They want all stakeholders as in the Government, citizens, industrialists, environmentalists and scientists to be made accountable for conservation of nature.

So what is that big step, these four friends want to take…? Will they involve their parents or go solo…? Will this step bring a change…? Will Bhura leave them and things will be normal again??

To get an answer to all these questions you need to read this wonderful book!!

Reading this book has made me realise that to see a change it’s important to bring the change ourselves. A must read for every child and parent.

If you liked this review and would like to order this book from Amazon (kbc affiliate link),