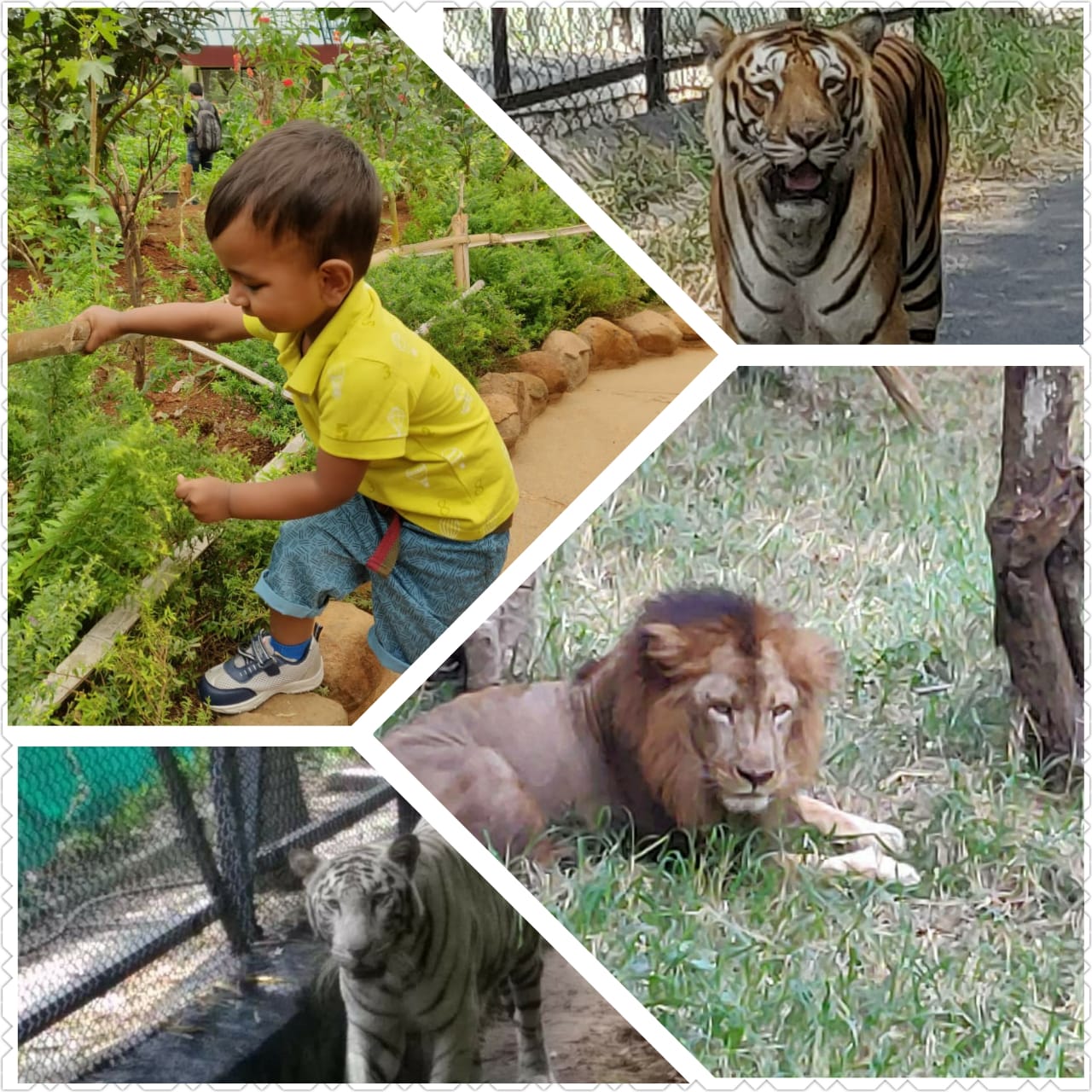 This story (rather two), is my entry for the #kbcKaadooMonkeyTales Contest.

My 4 year old son, Aarav’s love for nature and animals would make you think he was born in natural surroundings or on a farm. He loves climbing everywhere. That’s why I like to call him my little cat! His questions and quest to know more about animals (both wild and domestic) is immense. In fact we just ordered a big fat encyclopedia on animals from kidsbookcafe.com!

I’m sharing two of our different experiences: our visit to The National Park Bannerghatta – Bangalore and another wonderful encounter at Prani – A Pet Sanctuary.

While the safari brought alive the wild encounters alive, Prani gave us a glimpse into the lives of animals that have been subjected to inhuman acts of cruelty, but have been rescued and showered with love and care.

He loved both places which is why I can’t write about just one!

During our first visit, I was pretty apprehensive if my little cat would be okay!! But he surprised me yet again. All through the tour he maintained his calm and stayed composed. Even when those big cats walked past our vehicle, he didn’t show any signs of anxiety or fear. He just watched those majestic creatures walk by and said they look amajinghhhh (amazing). He was just 2 years old then and that’s how he would pronounce amazing :-).

Safari and the Sleeping Lion

Hahaha….if you’re wondering why would I mention a sleeping lion, then read on… We have visited the National Park twice, and both the times we have encountered one particular lazy lion. He was sleeping on both our visits. How do I know it’s he same guy? From his posture – belly facing the sky!

Our second visit was smoother as it was the little cat’s demand to visit the safari and the zoo. He majorly missed some dinosaurs, and kept asking, “Why aren’t there any dinosaurs?’’. So, I explained to him that they are extinct, and that was a long story meant for another time!

He enjoyed the safari visit more this time and said,

“Animals look happy when they are free while the ones in the cage look sad and gloomy.”

We were lucky to be part of the naming ceremony of a baby hippo and the birthday celebrations of a monkey and not to forget the butterfly park. All in all, a lovely wildlife experience! Which is why he wants to go back, again!

Love for the Voiceless at Prani – Kanakapura Road, Bangalore.

Prani was suggested to us by my husband’s colleague. We started early and reached there by 8am. Alas!! There was no one, a totally deserted look and the sanctuary had an eerie calmness. We walked in towards the counter and asked, “Is it open?” A teenager walked up and said, “Oh yes it is very open! You can walk around meanwhile; the tour starts at 9 am.”

We purchased our tickets and walked in, I somehow kept saying we should have gone elsewhere. Aarav was around 2.6 yrs old, so he was super excited and enthusiastic. I’m glad we stuck around patiently and waited for the tour to start.

The tour takes about an hour, a guide takes you through each animal’s story and how it was rescued. They have only domestic harmless animals that are rescued, the best part is you’re allowed to touch the animals and show some love. What else would an animal lover child want in life?

So we met a sheep and his mate. The sheep named Gunda and two imported German cows were going to be slaughtered and were rescued, treated and taken care of. Gunda was still a little fussy about human interaction. One of the cows which was supposedly never to give birth again, was pregnant! That’s what love can do, work miracles.

Then we met Maya the mare. Her owner had broken her legs because she lost a race. She was healing here and looked so magnificent. We also got to pet some guinea pigs rescued from an experiment lab, Himalayan goats sold for their meat, an Emu that was tied behind a dhaba for its meat, a variety of birds that were being smuggled for illegal trade and a Mumma donkey and her son, also an Iguana.

As much as I wanted to leave in the beginning, the whole trip was worth it. Aarav showed so much compassion and asked if we could adopt any of the animals. But they weren’t up for adoption! And now he wants a pet at home. But that’s a whole different story…