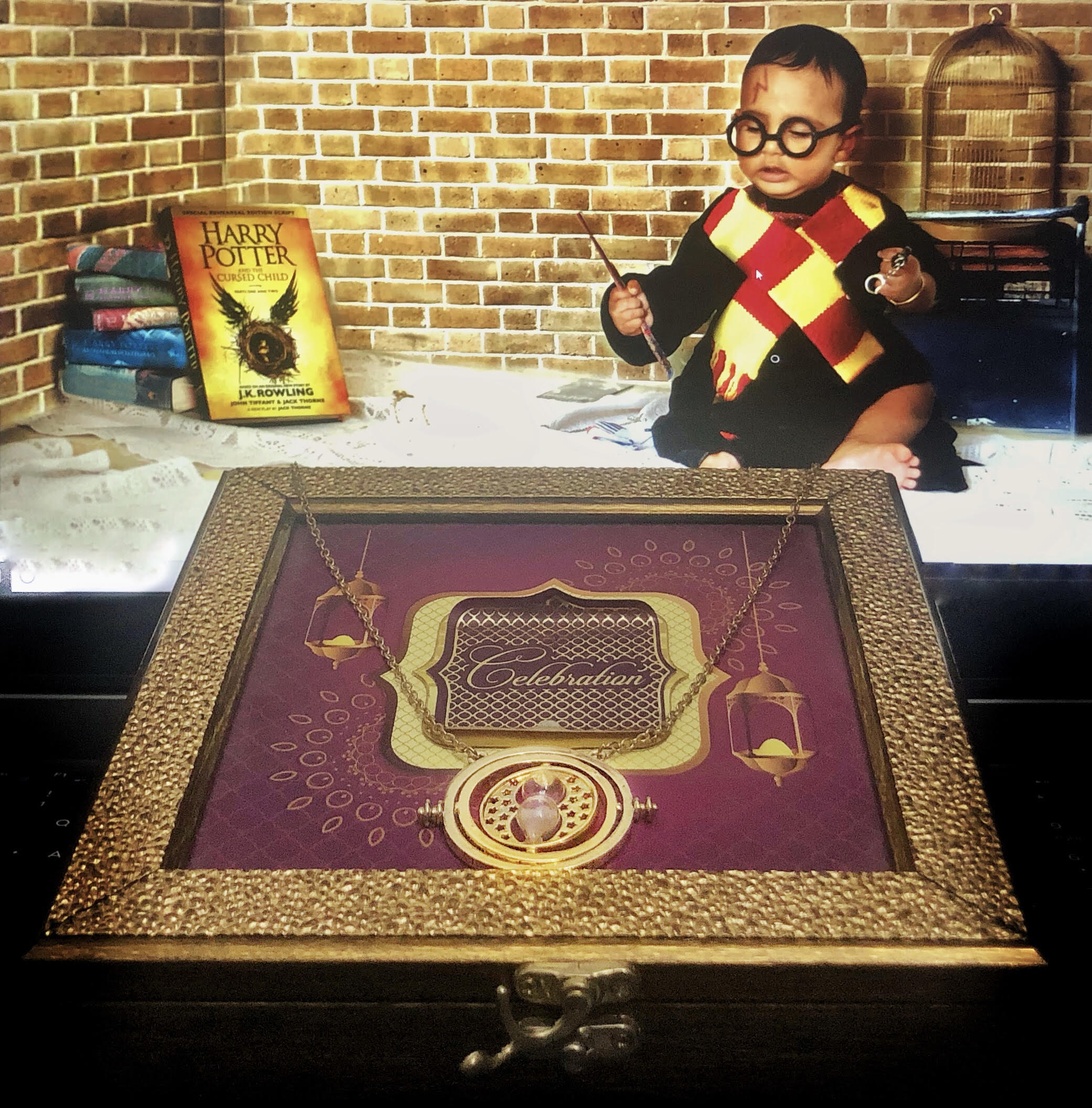 This is my story for the #kbcAPinchOfMagic contest!

“Mumma, can you brew some ageing potion for me?”
This was something new…Not Cake/Pasta/Pizza/Milkshake?
“Where did you hear about it Abeer?”
“Oh Mumma, it’s a potion to grow up quickly, don’t you remember? Fred and George used it in the Goblet of Fire”
I remembered reading the book to him last week.
So, this little Potterhead was beating me in my own playground now!!
“And why do you want it?”
“You know, I want to do so many things when I grow up. I thought why not start early.”
“Ok, Let’s see if I can be a star student in Professor Slughorn’s class”

I collected some herbs from balcony garden, some spices from fridge and started improvising the ‘Ageing Potion.’

As the water started boiling, I carefully measured ingredients and added them
• 4 butterfly pea flowers
• 4 Fresh leaves of basil, Cilantro, and lemon grass
• 1 tbsp Vanilla extract & honey
• Pinch of nutmeg powder & Rock salt
And to add some dramatic effect, I took some tiny grains of sand out of the time turner from our Harry Potter collectibles and added them too.
Soon its colour turned to greenish blue…it sure looked like a legitimate potion.

Abeer was looking at me with wide eyes.
“This should do it! Now let me warn you, this could have some side effects, you know”
“Oh, it’s ok, I might grow some beard, but I can just cut it”
This boy was surely determined to grow up quickly.
“Ok then, here is your glass of potion my dear Harry “

He gulped it in merely two seconds…
And then we waited …
Few seconds passed; seconds turned into minutes…
Abeer became anxious and drank all of it…
Minutes then turned into hours…and….
Nothing happened!!
Abeer felt so sad and dejectedly went to sleep.

I laughed it off…Such a cute age when you believe magic really exists!

Next morning, I got up with a scream….
“Mummaaaa…….. What is this……..”
I went to Abeer’s room and couldn’t believe my eyes…
My small boy (not so small anymore) was sitting on his bed with legs spread on the floor and head almost touching the ceiling. And that beard….
I almost fell on the ground with shock. I could not understand how this could happen.
People don’t age overnight magically, at least not in reality, right?
Was I dreaming? I pinched myself, ouch!!

“Mumma say something”
I had to gather my senses; I could not show how shocked I was…
Trying to look cooler, I said, “Well, clearly the ageing potion worked”
“Worked???? Is this how I am supposed to age?
I might not even be able to get outside of my room…”
I tried to cheer him up and helped him get outside from the door which felt awfully small.
As he tried to fit on the sofa in living room, he wondered,
“It was such a simple potion; how could you mess it up so badly?”
“Well, to be frank I didn’t expect you to drink it all…” I said out loud…
And muttered to myself, “And I probably didn’t think I could work some magic to make you really grow up. Does the time turner thing really possess some magic…? Am I really a witch? Did I miss my Hogwarts letter when I turned 11? OHH NO…..”

“But why did I become so huge? Did you mix some of Hagrid’s hair in the potion?”
“Where could I really get it Abeer? Besides, that would be Polyjuice potion and I don’t know its recipe. By the way, you look like part Hagrid and part Dumbledore… Look at that shiny white beard…”
This made him even more furious.
“Yeah the beard! Can you please cut this stupid beard? It’s itching so much”

I got the scissors, found one antique box, cut his lustrous beard, and kept it inside the box.

“Remind me to keep it in the cupboard later, just as keepsake for remembering our adventure”
“Huh…I don’t think I would like to remember this.
Now, am I supposed to just sit here for whole day? What about school, and my friends? “
“Ahh don’t worry about school, it’s online anyway. Join without video…
And don’t go and play…just sit quietly for a while like grown-ups do many times.”

This was a huge ask…and it was not part of the plan.
But there was nothing he could do; he had asked for it!
He did not utter a word even after listening to his friends playing outside.

By the evening, he got even more frustrated, “I wish I never wanted to grow up so soon…”
“Well if the legend is it be believed, the effect will wear off after few hours…” I tried to re-assure both of us.
“But that’s true about properly brewed potion. I don’t believe you anymore.”

I had never seen this boy so furious before.
It sure felt as if I were Neville in Professor Snape’s class.
Somehow, I calmed him down, made a bed on floor with extra mattresses and we both drifted to sleep.

Next day when we woke up, there lay my small kiddo just in his cute (and small) dinosaur pajamas!
I tried to remember what happened last night, looks like I just had a strange dream…I sighed of relief…
Soon Abeer woke up and said “Mumma, you know, I had a strange dream…”
Then he narrated the whole story.
I wondered how it matched exactly with my dream!
Probably we both were mentally living in the Harry Potter universe…side effects of too much reading!
But I swore to myself, I am never brewing any Potion, you know, just in case…!

We got up and went outside the room…
And there was the same antique box from our dream…I didn’t remember having it in home before.
We both looked at each other and we knew what each of us was thinking.
‘Does it have the Long-Shiny-Dombledorey-Pearl-Beard-Hair?’
We dared not open and see inside, because “What if……..?”