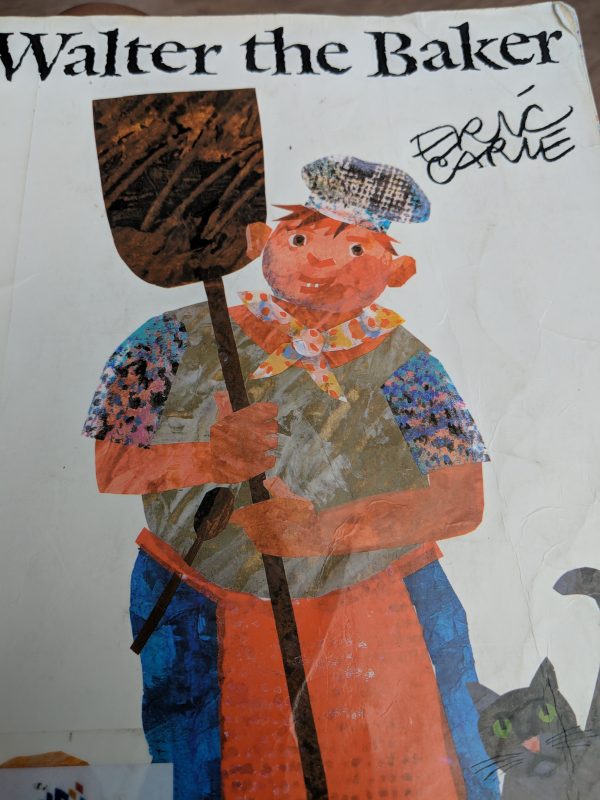 I really wanted to read more books written by Eric Carle. His most famous one, ‘The Very Hungry Caterpillar’ was such a big success in our home when my boy was just one year old. And now that he is five years, we were back with another Eric Carle book, Walter the Baker.

My boy recognized the author and shared my excitement. The book took us back in the olden times in a place where the Duchess and Duke were highly fond of the treats made by the Walter, the Baker. My boy frowned when the Duke threatened to banish the Baker because one day he was forced to use water instead of milk which accidentally was spilled.

“But it wasn’t his fault.” Complained my boy. “That is not fair.”I held his hand and we read on.

We were relieved that Walter was given a second chance but with a nearly impossible baking challenge. I asked my boy “Do you think the Baker will be able to bake such a difficult roll with so many conditions given by the Duke?”

Her urged me to read on quickly to find out. And when it we read that the Baker had actually accidentally invented the famous snack, the pretzel, my boy couldn’t hold his excitement.

“Let’s go and meet Walter Baker. I want some pretzels.” He cheered.

More than my boy, I think I enjoyed this story because it is a story of culture and how the famous snack may have been invented. It was however a bit lengthy for my five year old. Not too much. Just a tad bit.

As an after reading activity I asked my boy “If you were the Duke how would you react after eating the yucky roll made by Walter the Baker? Would you punish him?”

Surprisingly (a pleasant one) he answered “I would ask him to say sorry and give everyone the yummy rolls instead.”

Other books written by Eric Carle are The Very Hungry Caterpillar and The Grouchy Ladybug.

If you liked this review and would like to buy this book from Amazon,