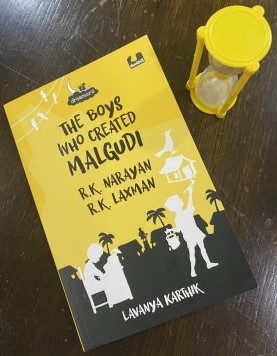 I was very excited to receive this book because this took me down the memory lane to my childhood where we used to watch Malgudi Days as a family. The music “ta na na nananana na” was literally echoing in my ears when I held this book.

R. K. Narayan (Rasipuram Krishnaswami Iyer Narayanaswami) was an Indian writer who wrote his first book Swami and his friends at 24 years. His brother, the famous cartoonist R. K. Laxman (Rasipuram Krishnaswami Laxman) was fifteen years younger to him and together they created Malgudi. The brothers have won many awards for their work including Padma Bhushan and Padma Vibhushan.

So we started off this book with me giving a little background to Divit and he instantly dived into it. The review that follows is written by my 8 yo.

My mum told me about Swami and Friends and how it literally used to play on every television set in her childhood days. I was intrigued to know more. This book told me how Malgudi Days-Swami and his Friends were created.

Right from his childhood Narayan loved to write. He had all the traits of a writer – he read, he wrote, he observed (A LOT) but he failed to get published. He sent his wonderful stories and poems to publishers across but got badly disappointed when they wouldn’t get published. But he saw his brother who was determined to be the greatest cartoonist in the world and was single mindedly working towards it. He was happy that his brother was clear about his ambitions and wondered if he could ever achieve his goal which he really wanted to achieve!

Deep in his thoughts he kept wandering through the streets of his amazing city – Mysore. He crossed all the familiar smells and familiar places of his city but he was lost in his thoughts. He reached the temple on Chamundi hills in his daze and didn’t realise when he started climbing those stairs. Not knowing who is around him he kept climbing until he reached the very top from where he gazed down at his beautiful city.

He felt like he was home. He instantly knew this is his whole world and he knew this is what will be his inspiration. He even left a mark of his journey there – PAST IS GONE, PRESENT IS FLEETING, FUTURE IS VAGUE. I deeply loved this thought and I am going to remember this always.

From then, there was no looking back – he could see a small town, a railway station and a boy running towards a moving train. He called the boy Swami and the village was called Malgudi. There it was! Then came many many glorious and wonderful tales from the boys who created Malgudi. All were from his life – but oh how they touched every heart. And who gave life to his stories – Doodu, his own little brother Laxman who was the best cartoonist on the block. (AND NARAYAN’S AWARD-WINNING ILLUSTRATOR🥇)

Hope you enjoyed knowing about these brothers as much as I did!

You can find the rest of the books from the Dreamers series here.

We have other reviews of books in the Dreamer Series which might interest you:
The Girl Who Was A Forest – Janaki Ammal
The Girl Who Loved To Sing – Teejan Bai
The Boy Who Loved Birds – Salim Ali