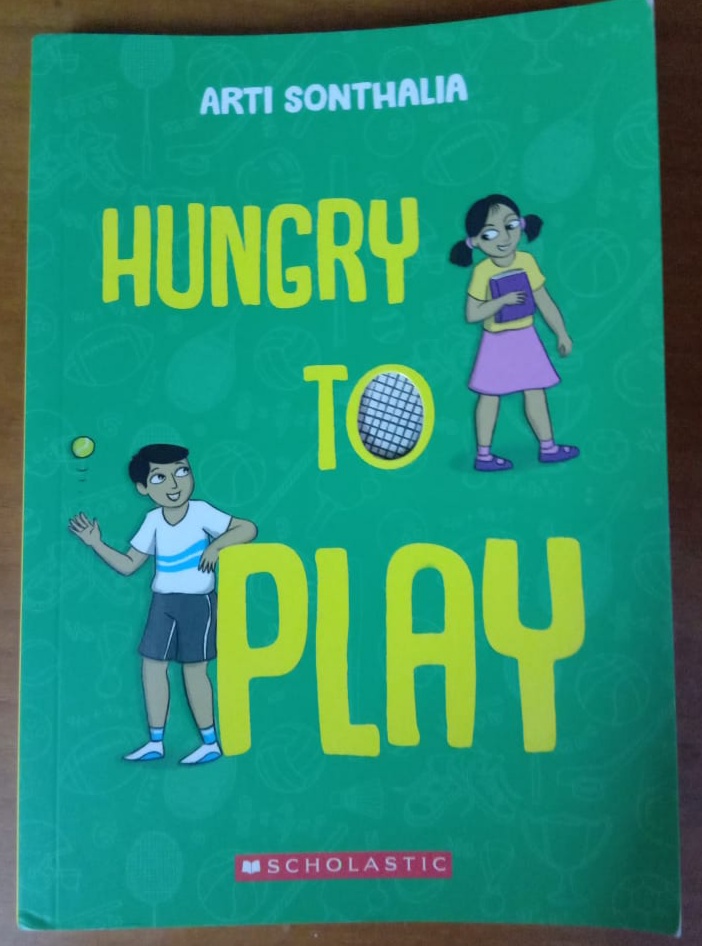 *Shortlisted for the 2020 Neev Book Award

We won this book as a prize for the #kbcKeepCalmAndReadOn campaign organized by Kids Book Café.

Hungry to Play by Arti Sonthalia is a book that deals with a pertinent and tricky problem that keeps cropping up in almost every school-going kid’s life from time to time.

How to balance academics along with one’s passion or hobby?

Interestingly, it is not only in this age and era that children and their parents are facing this dilemma, even earlier (in my own childhood days) it was very difficult making a choice between a conventional academics based career and following one’s passion (something which really excites us and doesn’t seem like work). It may be playing a sport, painting, singing, dancing or even becoming a sea diver or chef. More difficult was to get acceptance for this from elders in the family and friends, especially parents who wanted their children to perform well in life.

This story is about Kabir, a school going boy who eats, breathes and sleeps tennis. His idol is Roger Federer and he dreams of becoming a Wimbledon Champion one day. Now, Kabir is an ace in tennis and does wonders on the tennis court, but sadly when it comes to mathematics, numbers start dancing in front of him and he mostly scores an F in it. His below average performance in academics is a cause of concern for his parents and teachers. Due to this even Kabir is tense.

Kabir’s parents are usually very supportive in letting him follow his dreams, but even they are worried about his poor results in tests. Constant notes from his teacher Mr. Madhav add to the problem. They are not expecting top class academic results from Kabir, but at least want him to get decent marks in order to do well in life.

The situation at hand is that Kabir wants his parents to sign a consent form for an upcoming Inter-School Tennis Championship, but he has got poor grades in almost all subjects – his Math score is once again a disaster.

Kabir’s parents are really disappointed and in spite of his efforts to get his form signed by them, they do not relent. Instead they have a suggestion. They want Kabir to see a Math tutor, which is not acceptable to him. He feels that spending time with a teacher will take away precious time from his tennis practice and is demeaning personally.

Kabir’s troubles don’t end here. His classmate and strongest opponent Neel, who had defeated Kabir in the previous year’s championship, doesn’t leave a chance to put him down whenever they meet. Kabir has a true friend in Dhruv, his other classmate, but somehow he doesn’t open up much to him about his troubles. A surprise test given by the Math teacher rocks his boat further as this time again he gets an F.

Kabir is left with no choice now and he agrees to take Math tuitions thrice a week. A couple of weird teachers come and go but then Rahul (son of Kabir’s father’s colleague) enters the scene. With his help Kabir demonstrates a better performance in the next Math test. Finally his form is signed by his parents.

When everything is going as per plan, a mishap occurs and Kabir hurts his ankle. What happens next will be on everyone’s mind who is reading this review but I don’t want to give away the whole story…

Will Kabir get well soon…? Will he be able to practice again or will he miss the championship matches altogether…? Who will win the championship? Will Mira be a support for Kabir or will she continue being an irritating sister?

To know the answers to all these questions please read this wonderful story book. It is highly recommended for kids who are 7-10 years old.

The things my daughter liked the most about Hungry to Play:

My 10 year old daughter Ankita enjoyed reading this book a lot as it acted as a stress buster from her online classes & homework. I am glad that this book interested her so much. Especially these things:

1. Kabir’s willpower to go against all odds to follow his dream. If you really want something in life do everything it takes to achieve it.
2. She liked Kabir’s parents’ character a lot as their expectations from Kabir were realistic, and they supported his dreams.
3. According to her any kid who is facing a dilemma between following his or her passion and balancing academics must read this book. it will help them a lot.

We both love Arti Sonthalia’s books. She has a knack for writing about school days that children relate to very well. Her Best Friends Forever is a must read book. You can read my review of it here.

You can also read Payal’s review of Big Bully and M-Me here and Hungry to Read (review here) other must have books by the same author!

If you liked this review and wish to order it from Amazon (kbc affiliate link),