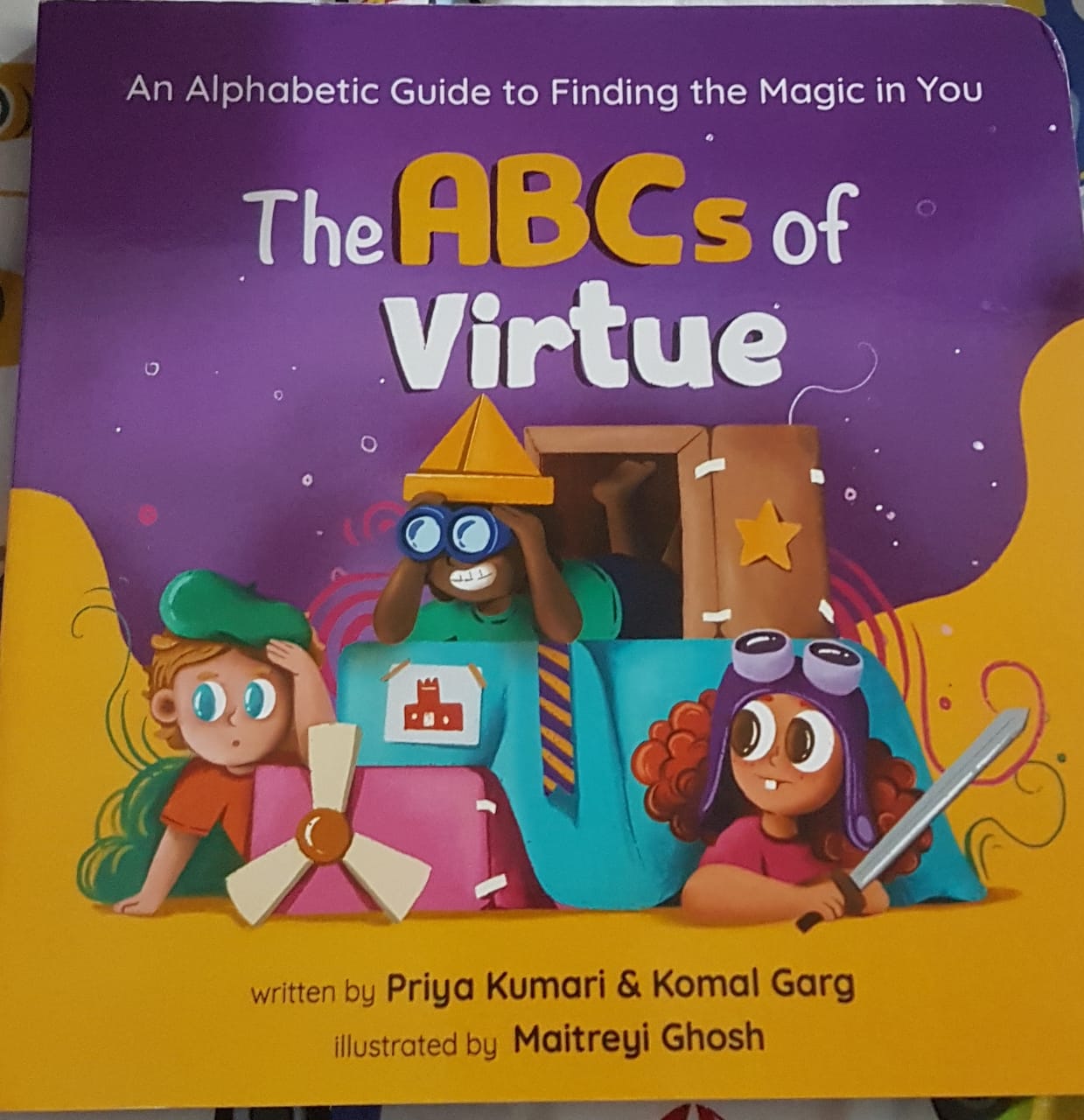 Prajkta Malvankar Kulkarni’s daughter’s book – Trapped In A Painting: “Eliza is a fun 10 year old who loves art & craft. One day, Eliza accidentally spills glitter on her painting. This incident leads to her getting trapped inside the painting! Patternista along with her evil sidekicks has captured Licious, the magical world inside the painting. How does Eliza get trapped in her own painting? Will Eliza be able to defeat Patternista with the support of her unique friends?” Will she get out of the painting?

Jyoti Bhardwaj – The Mystery Behind The Precious Stone: Many congrats Jyoti Bhardwaj on your new release! “Written especially for the children in age group 8-10 years, The Mystery Behind The Precious Stone, is a fun and exciting story about 3 young boys, their life and how, discovering a precious stone by one of them one day changed their lives forever. A young boy’s dreams and fascinating revelations about a secret stone builds interest and will keep the young readers engaged throughout the book. A great read for children who love reading fiction and are in a habit of reading after school and during bed time, this story book magnificently captures the mysteries of a peculiar childhood dream world and fantasies. The mystery behind the precious stone is a story about Brad, Frederic and Lee, three young boys who are best of friends living in a small European town with an ordinary life, spending childhood like the other boys in a small town”

The Maxima & Noah Escapades: Rescuing Holland – Many congrats Sivasankari Subramaniya Dorai on your 7 year old daughter Shrisha’s first children’s book published on Amazon Worldwide! We too are super excited to hear that she is the youngest author residing in Holland to achieve this. All the very best for the book!

The Boy Who Loves Numbers: WE HAVE ANOTHER CHILD AUTHOR IN THE HOUSE! Shweta Vij Narayanan’s 6 year old son, Laksh, wrote this book when he was all of 5 years old! It’s for 3-8 years. Do check it out!

Teen Waves: Meet the latest new author in the house Sarab Saini/Kaur who has written Teen Waves, a poetry book on the journeys of teenagers.

Seven Gems #1: Diamond Dilemma – congrats Ritu Jaswal on your 9 year old daughter’s self published a book on Amazon! Those who are into fantasy, do check it out.

Elise et Lapinou: Le Voyage Commence (The journey begins) – Welcome to the tribe Isha Bhasin and congrats on your book! “Élise et Lapinou” – a unique series of bilingual stories in French and English, is now available in India. It has been created to make the French language journey cheerful for children. Let’s join them in their magical journey of innocence!

The Village of Manapparai – authored by 10 year old kbc childoo Paulomi Babre, who has written 10 beautiful stories!! The synopsis shared by the author’s mom: “An examination that gave the girls fever, two children who come to steal idlis and a jealousy feud…. There are mysteries at every corner of Manapparai. May it be about a greedy cook, a troublesome boy or the mystery of Detective Yubhashana’s parents, Yubha and her friends Radha and Sumati are always ready to tackle them. There is no mystery too difficult for the four girls to solve. Also, not to forget Paati, who has been Yubha’s backbone. This bag of stories contains all the funny ongoings of Manapparai.”

“In the Age of Discovery, there were three identical crosses. Portugal’s King Manuel I had bestowed one on Vasco da Gama, who discovered the sea route to India. The second he had bestowed on Pedro Álvares Cabral, who discovered Brazil, and the third on Afonso de Albuquerque who established the Portuguese hegemony in the Indian Ocean. Over the centuries two of the crosses have disappeared. Probably they’re hidden away in some antique collectors’ vaults. The third hangs around James’s neck. A clause put in by an ancestor during the Inquisition in Goa prevents Aeram, a practising Muslim, from inheriting Richard Albuquerque’s estates. Only his Christian son, James, can claim the title even though he was born out of wedlock. When Aeram presents Richard’s will in court, Daniel Albuquerque aka Danny (Richard’s cousin) contests the claim. James and Aeram battle the demons of their past to take on Danny and the very powerful Archbishop Patrick to save their estates.When Aeram and Saysha go to New York, they accidentally meet Igor Lebedinsky, a young intern at Aeram’s agent’s office. Saysha discovers that he’s the son of Alexandre Lebedinsky, the mining tycoon from Moscow and brother of her deceased birth-mother.Saysha realizes that James is not an ordinary stuntman. Even her very rich and powerful husband is scared of him. In the forests around the Albuquerque villa on the banks of the Mandovi river, James finally shows her why the property means much more than mere inheritance.”

Be Like Nature by kbc member Piyali Mandal Karak’s 6 year old son. Based in California, Onir Karak (child author) has written and published his very first book. He loves to read and write books. While he has many manuscripts, this is the first that he wanted me to publish for his upcoming birthday. Be Like Nature is available on Amazon Kindle for everyone to read.

Through Time: A terrific teleporter travel to the future by kbc member Manisha Khedkar’s son, Akshay. This is Akshay’s first book and is a science fiction book based on the storyline of time travel.

I’m a journalist by profession; recently made my debut as a children’s book author with the title “Puhor and Niyor’s Mural of Family Stories”. It is a 1404-word children’s illustrated work, aimed towards a global audience of children between the ages of 4 and 10.

“Puhor and Niyor’s Mural of Family Stories” is a story about families, told by twin brothers Puhor and Niyor. It is a story illustrated with images of each unique family added to a grand mural. These different families include children with two moms, two dads, a single mother, a multiracial family unit, foster and adopted children, pet parents and more. These families teach each other about different types of people, and to not judge others based on their race, gender, sexual identity, disability, differences in background or anything else. They embrace their differences and paint a beautifully coloured mural, as beautiful and colourful as the community itself.

Baby & The Red Bird for 0-3 years – debut book by kbc member Soumyashree Rai!! Many congrats to her!

LAL PEELI NEELI VISIT THE SPACE: A SPACE ADVENTURE IN RHYMES Our very own kbc member Khushboo Agarwal has written her debut book for 0-6 years! Quoting her:

Since, the kids like rhyming,
Hence, presenting a Space Adventure with detailed findings.
Lal, Peeli, Neeli,the three sisters of different age respectively,went to space.
In the spaceship , they headed towards the centre,for an exciting space adventure.
They spotted all the Planets and Satellites, Meteors and Meteorites, and learned all the facts with stats.
Suddenly, their spaceship gets stuck in Saturn rings,
Is there any way to save the sisters in a blink?
Come , let’s learn and have an adventurous ride of space,
With the three sisters of different ages.

Magic in My Hands: “No Matter What Problem or Disability You Are Facing, Do What You Really Want to Do Because Life Does Not Give You a Second Chance.” – Jazz by kbc member Richa Porwal’s son, Abeer Porwal

Planet B – Making of M.I.T.R.A by kbc member Ratika van Noord for 10 years+

Quoting Ratika, “The book is printed with soy-based inks on 100% post consumer recycled fibre. This was something I was very particular about, considering the main take-away from this fictional story based in a dystopian future, is waste segregation at source.”

My Crushed Tooth by Vvirajah Chhabra