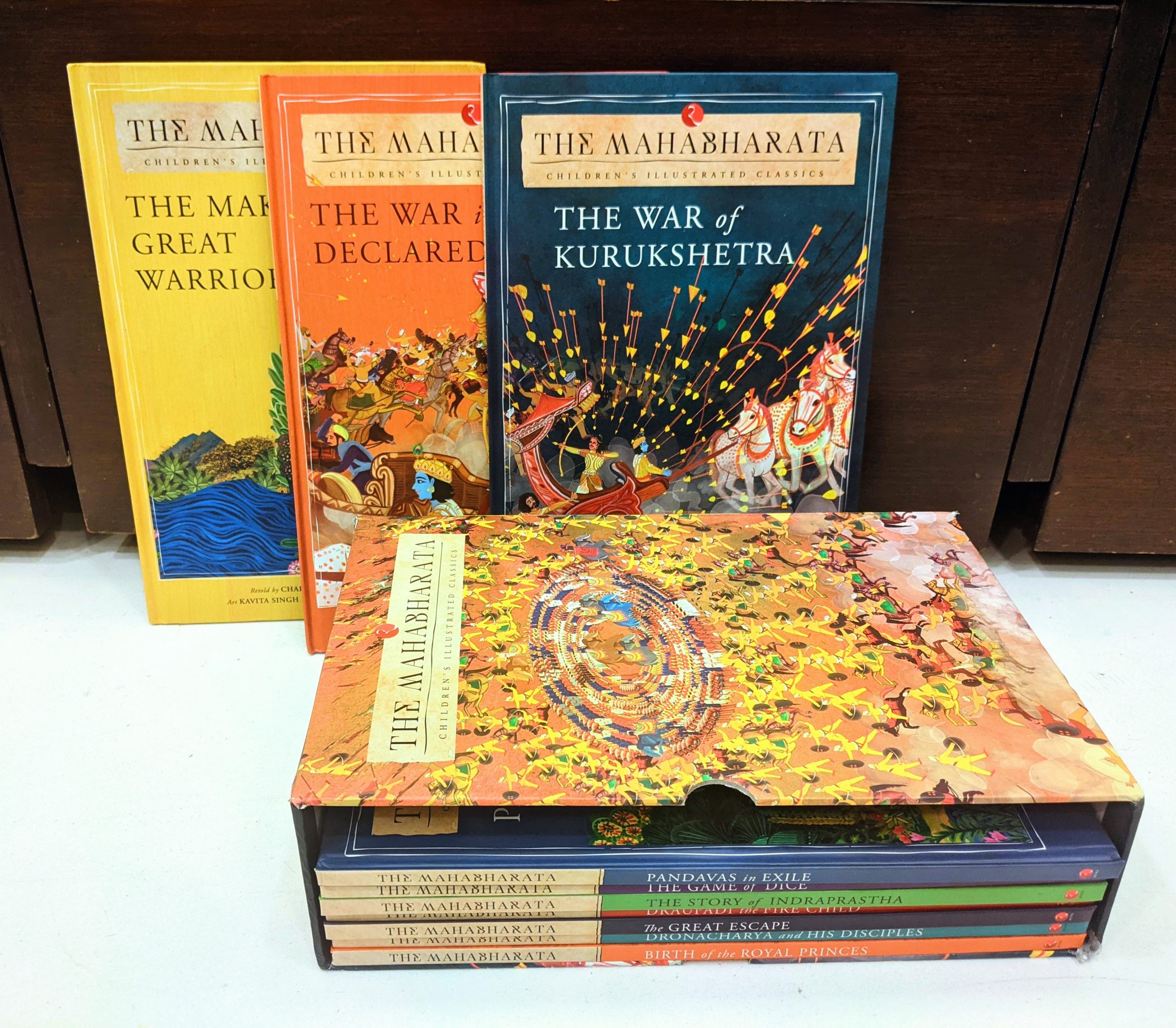 It was near Christmas when a dear friend, on a whim, gifted us a version of the Mahabharata. The book looked a bit old school and while big print, it was still quite a lot of text. 108 pages of text! I didn’t expect my 4.5 year old to take to it, but oh was I surprised. He didn’t just enjoy it, instead he has delved into the subject as if he’s preparing for a kiddies doctoral thesis. It helps that his Dad is enjoying it as much as him, and so mythology has filled our cup to the brim these past 2 months.

While he is exploring the Ramayan as well, our first experience has been with the epic Mahabharata and all that it encompasses.

With such a vast body of information on its variously legends and tales, it only made sense to explore books by various authors and publishing houses, for each one’s telling is quite different.

a) The Complete Mahabharat

Shree Book Centre has a group of 6 chapter books in the Mahabharata series, each between 100-150 pages, and it was the first series biggie was exposed to. While the don’t have the most literary prose, they are well written; the illustrations are a little old fashioned, but my boy has enjoyed them the most. I have attributed it to the fact that from a child’s perspective, the characters and their faces and expressions aren’t artistic, but realistic, and the language simple and to the point.

The Complete Mahabharat covers the entire tale, from the ancestors of the Pandavs to the war in Kurukshetra and its dramatic culmination. There are chapters dedicated to each major event such as the game of dice.

The remaining books are based on key characters, and explore their role from birth to participation in the war. Each chapter tells a story about them that adds more colour to the Mahabharata as a whole, as well as gives more insights into their characters. The series includes-

Mahabharata Stories by Subhadra Sen Gupta, published by Om Books was our second introduction to the epic. A series of 12 books, each books tells a single story that is a part of the greater tale. If I had to compare them, each book in this series is equivalent to one chapter in the Mahabharta book by Shree Book Centre. The books have clean, modern illustrations, and the language reads finer. This would be a great self read for an advanced reader where one is not looking to extrapolate on the details. It did lack some of the depth and drama as the illustrative style is flat, so for a child that the story is being read to, the characters look a tad blank. The books are also shorter in length, perfect for the early reader, and it helps that they’re available for purchase as single books. They are also available as a set.

The Mahabharta: Children’s Illustrated Classics by Charu Agarwal Dhandia, Kavita Singh Kale and Rachita Rakyan, published by Rupa, has been our most recent read of the epic. A slip case with 10 beautifully hard bound books, I dare say this may be a children’s collector’s buy. Each book takes you through the tale, in a chronology of events. The language is clear, the explanations succinct, and the illustrations artistic without being too abstract for my older one to relate to. The books are also a little longer, close to 50 pages each, and follow a chapter book format, so they hold more detail. What we love most is the family tree that appears at the beginning of the book for easy reference, along with character descriptions. With long and grand tales, where I most definitely don’t know more than my boy, this is helpful even  for me when he sprouts a question such as,

“Why did Hidimba do that?”

and I’m still frantically trying to remember who Hidimba was and what he did. The series contains the following titles –

The Making of Great Warriors

The Birth of the Final Princes

Dronacharya and his Disciples

The Game of Dice

The Story of Indraprastha

The War is Declared

The War of Kurukshetra

Does your little one thrive on mythology? Share your reads with us because we’re always hungry for more!