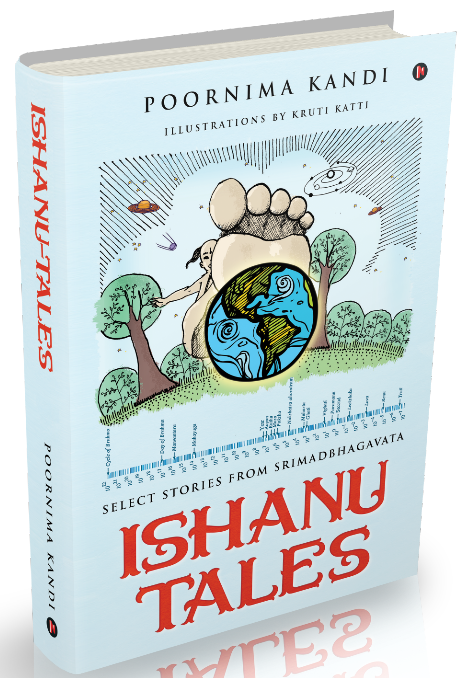 Age: 8 years+ (also doubles up as a colouring book)

Meet Author Poornima, who shares the very interesting story behind the stories in her debut book!! In her own words…

The journey of my book...

As a child, I grew up mostly in a joint family, with aunts, uncles, cousins and grandparents around, which meant too many influences. However, my grandmothers have been and remain my greatest source of inspiration. They epitomise strength and affection. Traditional and pious but displayed strong personalities!

Unlike other children, I wouldn’t call my grandmothers, ‘Ajji’. In fact, all the grandchildren in the family would call them Doddamma (big mother). Both of them had become grandmothers before they turned forty-five years of age and addressing them ‘Ajji’ was inapt! They knew what life was all about.

Doddammas, fondly called ‘Dodda’, were very traditional in their mannerism and attire. They would neatly drape nine yards saree every day, adorn their foreheads with a big vermilion streak, braid their hair and fold it into a bun and go about their chores without an iota of discomfort. No one left their house without an empty stomach and a smile on their faces. They never showed their love explicitly, which was a typical reflection of the many Brahmin households, where it was believed that any display of public affection was uncalled for! However, they ensured that love is conveyed either through their cooking or by just being around.

My Grandmother’s stories were in her songs

My paternal grandmother was a chubby, short and cute woman with a resplendent smile on her face all the time. She may not have been the head of the house but was the most sought-after, for advice. I have fond memories of her from my childhood. Be it waking up to the Devaranama (devotional songs) or relishing the food that she cooked painstakingly for everyone. Although, I never made an effort to learn the devotional songs, they keep ringing in my ears even to this day. That was the impact of her singing and also an inspiration to write stories. As a child I did not understand the meaning of those songs but realised later that they were full of stories! Stories, which took me into a different world.

My Grandmother’s stories were in her talk

My maternal grandmother had an unusual way of telling stories. She would randomly start a conversation and connect it with a story from the Puranas. While she expressed her displeasure of my ignorance of Puranas, she never let go of an opportunity to narrate the story. She had very little schooling, yet had great command over her language and would never skip her daily reading session. She would do that until she aged. Even to this day, she keeps everyone’s spirits high with her stories.

My grandmothers may not be the most famous women but they are truly the strong women for me. Like many others of their time, they have seen hardships in the form of back-breaking physical work, lack of choices and loss of dear ones to diseases. There is a story behind every struggle. Perhaps they found solace in singing devotional songs and listening to Puranas. It made them forget their pain and become resilient to life.

The essence of resilience was evident in their conversations and stories. I have tried to capture the essence of such conversations and thoughts in my stories. All of them are an essential part of the book. Select stories from Srimadbhagavata, interwoven with some anecdotal reference of incidents of various phases of my life, is my way of expressing gratitude to my grandmothers. I wish that this book would leave a lasting footprint in the lives of my children and my grandchildren!

Ishanu Tales is available on Kindle and in Paperback on Amazon. To order your copy, click the button!