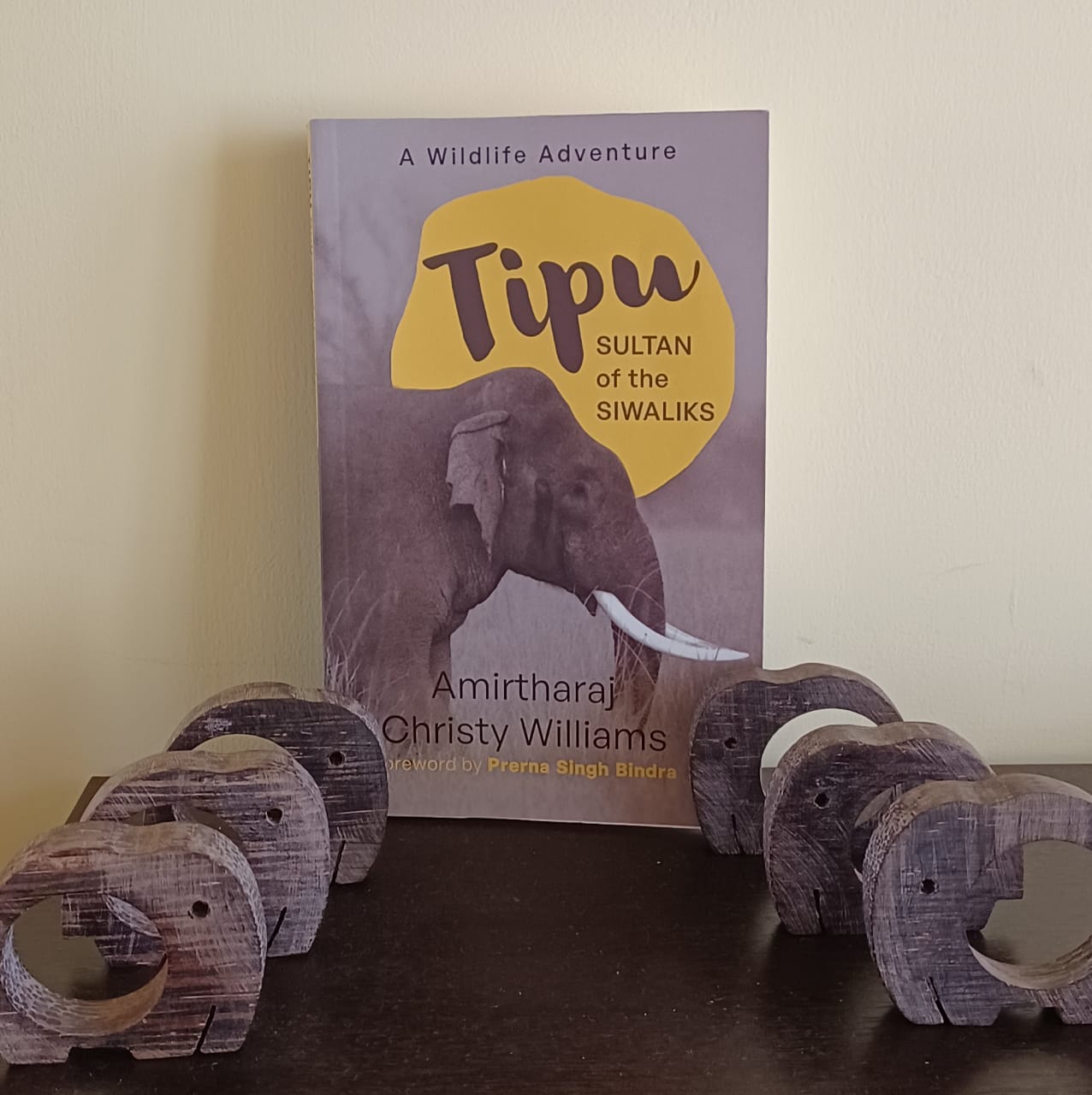 Title: Tipu, Sultan Of The Siwaliks

Age group: 13 years+ (even adults who are wildlife enthusiasts and who enjoy real stories will definitely like this book!)

It’s not often that you read a book end to end in one sitting. And then re-read it.

That’s how much I enjoyed the book – Christy’s memoir. Here’s an attempted ode to give you an idea.

Once there was a tall young man
By the name of Christy
Who found elephants more than touristy
So he decided to do a PhD on Asian Elephants
Brave the heat and cold
For the new passion in his life
Turns out, this is where he met his future wife
It all happened in Rajaji National Park in Uttarakhand
A land known for its cold winter months
Here, there were elephants galore
So many, that he soon lost count
Fortunately for Christy
Help was on hand
In this terrain and land
Thus began a kinship
With Indian Forest Officers
Volunteers and staff and vets
All protecting the elephant in its majestic glory
Then started a friendship with the Sultan of the Siwaliks
Tipu the King of Elephants
Tallest and Gentlest of Giants
Christy knew elephants live long
And that their family ties are very strong
61 years is a long time
Thank God elephants can survive
Against the odds on their lives
Express trains thundering through
Gujjars’ villages among the grasslands
Leading to a conflict between man and animal
Did you know,
Elephants are innocent but nosy foodies?
They will come over for your goodies!
Wheat, flour, sugarcane, salt, even the tipple that brews
With a touch of the trunk
And your hut can be shrunk
Thanks to the efforts of Christy and team
The villagers are now shifted
The train speeds are muted
The elephants standing taller in glory
The grass growing longer in Christy’s story
As we read this true tale
We realize the challenges one needs to nail
To this team of Christy and his merry men
Goes the credit of putting a GPS tracker
On 8 of the majestic best
These Radio Collars
Fastened with nuts and bolts
Read how Christy
Could venture
Closer to adventure
But BEWARE!
Never encounter the animal in its musth state
You are well advised to stay away
Animals as intelligent as the elephants
Are smarter than most
Leaving behind memories for their dost
Take a bow Christy
5 years in the jungle
Every rumble, squeak, grunt, swish
Decoded by Christy
While we may think it’s cakewalk
It’s not.
To wade in 5 feet smelly dung
Climb a tree or risk getting flung
Not to forget the day everyone got stung
For, honey bees never liked human company
The book’s an ode to the elephant
And to the band of men and women
Who continue to protect them
Living in bachelor’s accommodation
Surviving on Maggi
Our glorious elephants
Mallika, Aishwarya, Shah Rukh, Tipu
Walked tall
Christy you deserve a round of applause.

If you enjoyed this review in verse and wish to buy the book from Amazon (kbc affiliate link),