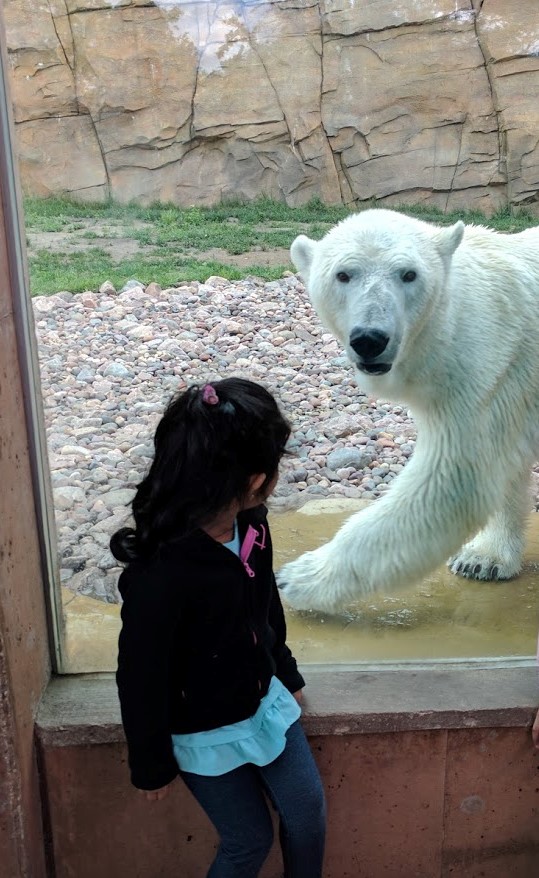 Please consider this as my submission for the #kbcKaadooMonkeyTales Contest 🙂

In a span of seven short years, we moved eight times – covering 7 different states in the US (we are based in India now). With a toddler in tow, zoos were our favourite hangouts! While the moves themselves were a whole different story, they gave us the opportunity to visit a great many zoos across the United States.

I’d like to share a couple of instances. There’s a very important underlying theme in all of them.

This was my little girl’s first brush with feeding animals. We had to climb quite a few steps to reach this shed several feet from the ground. We were in a long line of visitors who took turns feeding the tallest animals to walk the planet. Giraffes! We were waiting impatiently for our turn fidgeting and eager to get a bunch of those green leafy things to feed the 15 feet hungry beauty! We get there, the zoo staff hand my daughter a nice big green leaf and she very bravely goes forward. The giraffe opened his mouth and out leapt what she really thought was a snake! Oh how she jumped! The giraffes have really long slimy tongues and my daughter decided it was time for a game. She cut the leaves into smaller pieces and randomly threw it in the direction of the giraffe’s face. To his credit, he got them all. I thought I almost heard the giraffe give us a boastful snigger.

We had been to this zoo before but the polar bear enclosure was not open during our previous trips. This time my daughter was super excited to see the giant white bear. And this particular bear was behaving so well for the visitors. Just walking up and down the length of his enclosure, occasionally pausing to see if some of us got replaced by others. Eager to get a picture with the handsome furry bear, I got my daughter to sit on a little ledge outside the enclosure. She sat bravely… until the bear walked by… every single time! Each time the bear walked by, she promptly stood up and sat down again. The bear probably felt like royalty with all the respect he was getting! As we went through the pictures today, she thought it seemed rather funny! (She is 7 now)

Most zoos we have been to, only allow petting or feeding of some animals during limited hours on a given day. The Great Plains Zoo in Sioux Falls, SD was the first zoo we’d been to that allowed for rides! My then 3 year old daughter was thrilled to even see the ships of the desert. When she found out she could even ride one, she was ecstatic!

We climbed a set of narrow steps to reach this little tree-house from where she could get on to the camel back. The moment the zoo attendant helped her onto the gigantic humped animal (who, by the way was thankfully standing already), my daughter’s eyes widened a bit and then she settled comfortably.

As the attendant gave her instructions she said, “Amma, vaa!” (Amma, come!). I said Amma cannot ride the camel. It was only for children.

She was super scared initially, glowering at the camel’s head. In about 8 minutes when she had to get off the camel, she did not want to! “One more ride, Amma!” she pleaded. There were other children in the line and we moved on to other animals in the zoo. But she decided that the camel was a nice animal and indeed was a good friend!

Of course there have been occasions when we spent several long minutes for Mr. Tortoise to carefully walk over a twig, or turn away a tad disappointed because Mr. Peacock did not feel like strutting for us even though it was drizzling and he was supposed to dance when it rains! Then there was this time when my little girl did not take the lion’s no for an answer and asked him to “Giddy up!”

But we now know that a zoo trip always promises adventures galore! Never a dull moment when we have so much to learn and explore!