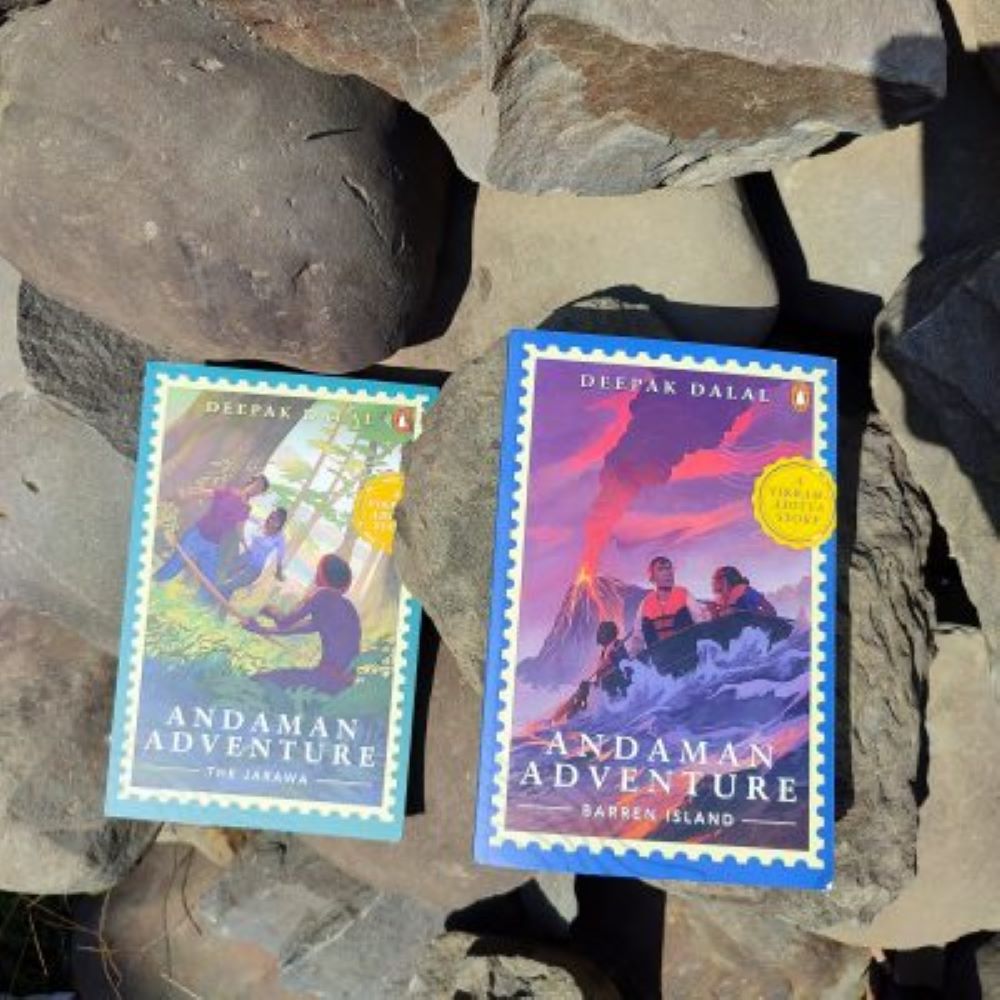 I am posting this on behalf of my 15 year old daughter Sonimrin Shimray, who loves spending her time reading and painting.

The Andaman and Nicobar islands is India’s paradise on earth. With clear blue skies stretching far and wide to emerald waters bustling with coral reefs and lush green hues of the forest. But off the coast of the main shore lies the uncharted waters of meandering creeks canopied by mangroves where one wrong step could lead you to being the crocodile’s next meal. The cumbersome access isles are avoided as many who go in are often never found and some who do, ever make it out in one piece. Despite the dangers, three teenage daredevils – Vikram and Aditya along with their companion and guide, Chitra challenge mother nature and follow the trail of the incredible forests. These very forests are inhabited by the Jarawa – an ancient tribe who have never come in contact with the outside world and  pose another ‘threat’ to the teenagers’ travels. The trio embark on a journey pursuant to the plan until one night they get captured by an unknown criminal entity, separating them in the merciless wild.

I have noticed in many adventure novels, the protagonist is put into a backdrop of an indigenous location where the indigenous people themselves are depicted as villains of the story. Even their characteristics are exaggerated, often portrayed as unnecessarily aggressive and two dimensional elucidated by poorly researched ideas. Though times are changing and people are more conscious about this problem, the stereotype still exists especially in such types of adventure novels. However, the writer changed the narrative too, and what I love about his take on this is that he made the situation grey for both the protagonist and the tribes. You’ll see this for yourself once you read the book. He makes it evident that he put his sweat and tears into researching the isolated tribe – Jarawa. Fortunately he avoided it from turning it into another boring Geography and History lesson from the scrutinised information and blended fiction and reality well.

Vikram and Aditya situate themselves in Port Blair known for its infamous central jail and inaccessibility (hostile to escaped prisoners). There Vikram finds a series of clues tracing back to the men who had abducted him earlier in the first book at the Jarawa Islands. Due to unexpected circumstances while  being surrounded by criminal wrath, he is forced to escape to unknown shores which leads him to the isolated outpost of India – Barren Islands.

In both the books, Dalal has very beautifully captured the underlying soul and calm beauty of the place, along with highlighting its wildness, subterfuges of nature, and the sudden cascade of mishaps that may befall those who are not wary and allows you to live the full experience, with vivid clarity. The author does this flawlessly and has unintentionally taught me many lessons on descriptive writing.

But Dalal’s Achilles heel is evidently common in both books which is poor plot building and it’s truly disappointing to see such a story with so much potential fail to bring out the essence of a promised thirteen plus adventure novel. Most of the unfolding story was predictable and stultified and it lacked understanding of keeping up with an appropriate pace. At times in certain sections of the book, the regular situations are dragged on for too long and the action or adrenaline parts are cut too short for the reader to savour. To conclude, I preferred the second book over the first one.

If you liked this review and wish to order these books (or either of them) from Amazon (kbc affiliate link),

Disclaimer: Sonimrin Shimray is part of the #kbcReviewerSquad and received this book as a review copy from the publisher.