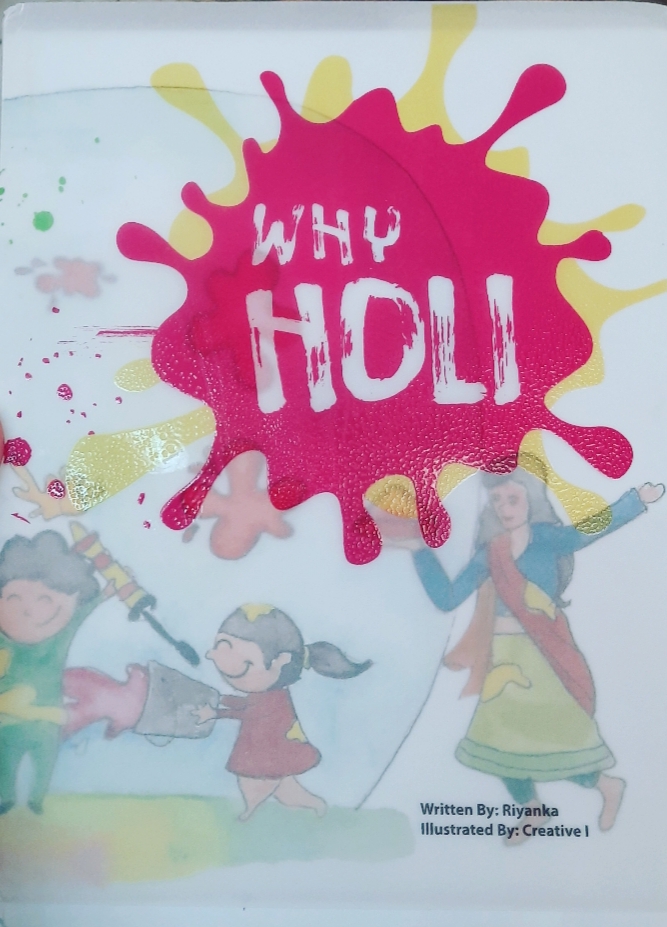 As a young child I was fascinated with Mythological tales, I remember sitting with my grandma and listening to the most amazing stories of various Avataars, tales of Ram and Raavan, of Krishna and Kansa, Bal ganesha, Veer Hanuman.

Now, I have a curious little 5.5-year-old daughter who is an early reader and a true book lover. I think, as our children get older, it is important for us to read and make them aware about our mythology. Many Indian authors & publishers are also beginning to realise the importance of mythology and have written & pubished some excellent books for children of all age groups to read.

Mythology is an important part of any culture. It plays a large role in the rituals followed in society, and in the way your community thinks and functions. In India, we are all thrilled when any festival is around the corner… be it Holi, Diwali, Eid, Gurupurab etc.

We recently won this amazing book called ‘WHY HOLI’ by Author Riyanka in the #kbcHoliHai Contest here on kidsbookcafe.com.

Author Riyanka’s Why Holi is an outstanding children’s book on Holi Festival. As we all know “Holi is a festival of colours” but there is a mythological tale behind the whole ritual.

What is Holi? Why do we play Holi? Which rituals are performed during Holi’s? What is the real story behind Holi festival and why do we celebrate it? All the answers are in this book!

The book talks about the Demon King Hiranakashyap. How he prayed to lord Brahma and earned a wish to be an immortal soul and live forever.
The boon said,

He could not be killed by man nor by an animal; indoors or outdoors; neither above the ground nor on it; and neither in daylight nor in the dark without a doubt.

“How clever was he??” Kaavya laughed at this and said “he was a very Chaalak Raja mumma…”

He wanted everyone in his kingdom should treat him like God and worship him. Everyone was scared except one who still worshiped Lord Vishnu. To his surprise he was his own son “Prahlad”. Demon king was very angry and ashamed of this. The king tried all his means to convince his son but he failed, so he decided to punish his son. He tried many harsh ways to torture Prahlad -pushed his son from cliff, threw him inside a deep well, even threw snakes on his son, etc but each time the king failed which drove him crazy.

Demon king  “was tired from trying to punish his son nothing seemed to be working”
So he decided to call his big bad sister Holika.
“Who had a boon where fire can neither harm her or even blister”

To this Kaavya got very upset, “Mumma how could she do this to a child?? Evil Aunty…”

“Holika sat on a wooden pyre with Prahlad by her side, thinking she would come alive while the pyre was set alight”
Lord Vishnu took Holika’s boon and gave it to Prahlad and saved his life. Prahlad emerged from the flames without a single burn while Holika was turned into ashes.”

Kaavya was very happy with the way Lord Vishu saved his devotee and punished the “evil aunty”.
“Good deeds will bring good to you, bad deeds will land you in trouble.

At last lord Vishu met all the conditions to Brahma’s boon, took Narshima Avataar and brought the demon king to his doom.

That’s why the day is rejoiced as Holi every year. We burn all the bad and evils in Holika’s Bonfire and pray for happiness and good fortune. Next day people play holi with water and colours to express their happiness.

Our learnings from the Story:-

If you liked this review and wish to order the book from Amazon (kbc affiliate link),