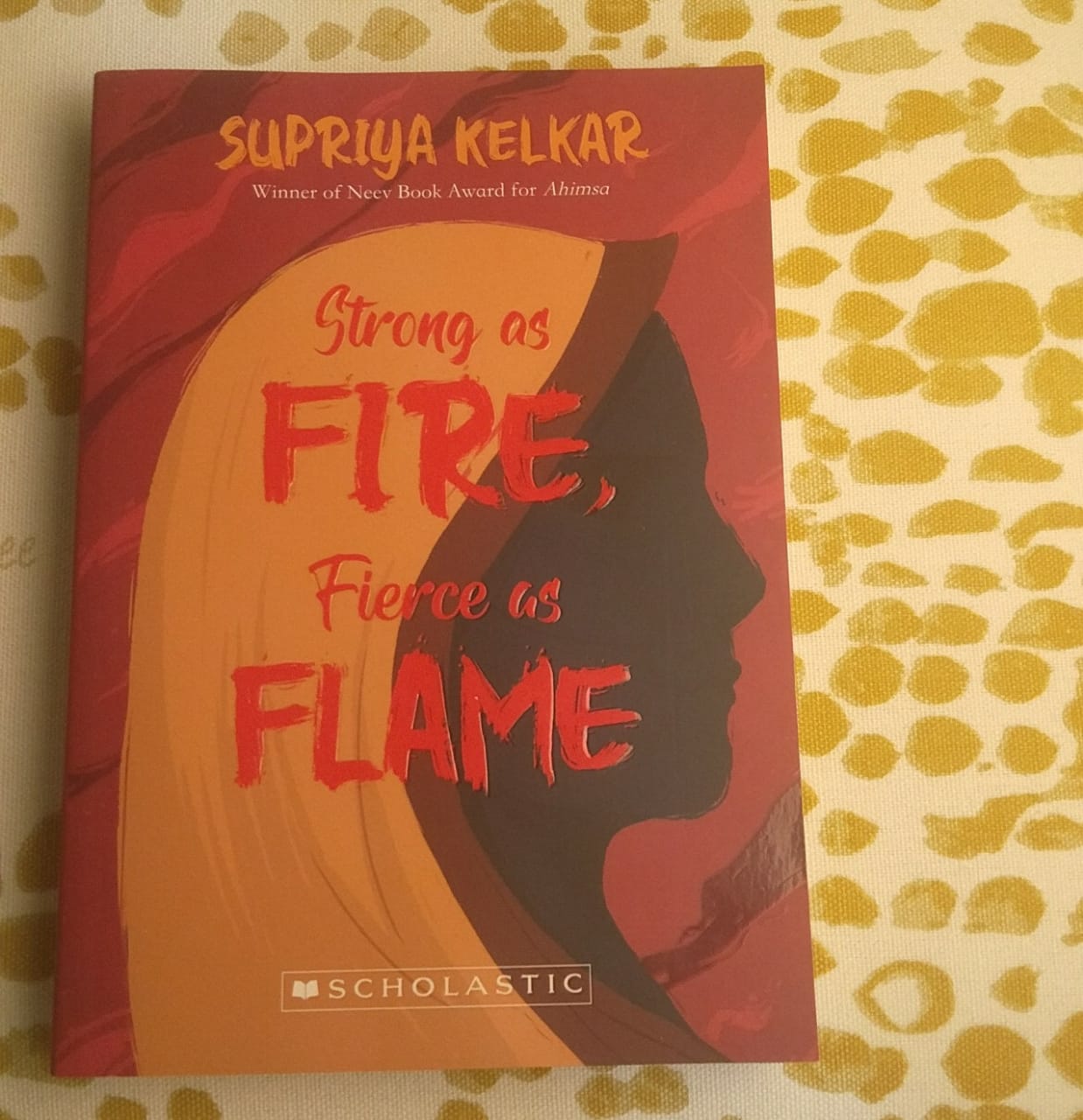 Age group: 13+ (Young Adult) as suggested by the Publisher

I am posting this on behalf of my 13 year old daughter, Sonimrin Shimray. She is an avid and advanced reader.

“Sita told me women were as strong as the sacred fire in the wedding
ceremony. That we could grow into a blaze, overcoming any obstacle in our way. But we could also be strong by accepting difficult things. She told me to accept that this was your fate. So I need you to be strong as fire too and accept that this is happening, because it was decided years ago, and nothing can change that. So accept that it’s your duty to go to Krishna’s house and be his wife. Can you do that, Meera?”

Strong as Fire, Fierce as Flame is categorized in the genre of Middle Grade
Historical Fiction, written by Supriya Kelkar whose earlier book “Ahimsa” I had read and I absolutely adored it (read my review here). So when I was given this review copy, I couldn’t wait to read it.

As a teen who takes great interest in history even beyond my syllabus, I have always had a deeply disconcerting relationship with how my history books and my English literature classics were spun in such a biased manner through the eyes of the white man or the colonizer, the ‘writers of the story’ as I call them.

Their stories are like sweet pink roses from the outside with hidden thorns and only when you touch the stem will it prick you with ‘reality’ that everyone should be aware of; but instead most of us only see the beautiful petals. People of other races and ethnicities who suffered injustice throughout history, never got the chance to pen their story down in the history books because they were written by the same ‘writers’. Instead, they were portrayed in manners in which they were “servants who must salaam to you” as Supriya rightfully wrote.

In this book we are introduced to this all too familiar mindset of the British who arrogantly thought their ‘civilizing’ ways were the solution to all problems. They considered themselves ‘saviours’ of the country and carried this ‘burden’ while they plundered India.

It angers me every single time when I read the hypocrisy and this author has spun the story of this great injustice in such a simple way where all ages can easily grasp. Going beyond the many pages worth of figures and dates in our history school books, Supriya has given us a glimpse into how these humans felt during those times where life was all black with neither grey nor white shades. In fact she confesses that she wrote this book in the hope of painting a more accurate portrait of what was going on in those times through the eyes of the colonized – in this case, Meera, a young female protagonist who is destined to devote her entire life to a man named Krishna from a neigbouring village somewhere in North India in 1857 where discrimination, sexism, etc were as common as overgrown weeds in a garden.

Meera unfortunately and obviously had no say in this misogynistic practice of forced child marriage and abides by the orders that she had been given. She moves in with her in-laws and husband at the tender age of thirteen as you may have observed from the quote in the start. Life went on for her; her father stayed the sexist, narrow minded teacher that he was, not giving her an education saying, “school is only for boys”. Her mother is but a helpless woman who is cuffed to the chains of her unhappy marriage and society’s loathsome expectations.

This all goes for a toss (as if child marriage wasn’t abhorrent enough) when Krishna passes away suddenly resulting in a terrifying fate for Meera. She must perform sati which was an age-old practice (thankfully abolished now) in India where women immolate in her husband’s pyre. Yes, let that sink in.

But Meera was a lion heart and escaped her fate to rewrite her own destiny by running far far away leaving even her beloved mother. The mother she looked up to and shared a profound relationship with, which the author has evidently emphasised in such a lyrical manner every now and then. Showing how much the protagonist misses her mother’s warmth yet is conflicted by feeling betrayed as to why her mother never said a word when she was going to commit sati. Why her picture of the female saviour, a caring mother never materialized when she needed it the most?

This dynamic between Meera and her mother was something I loved seeing throughout the story and is worth analyzing further.

On her quest to find freedom she met a group of people and made their acquaintance. She even formed a friendship with Bhavani, an educated girl with an open mind and liberal upbringing. In Bhavani’s world women were treated as equals to men, sati was abolished, and child marriage wasn’t even on the list of things one should do. Their worlds were opposite. Befriending Bhavni left Meera experiencing things she could never do under her father’s and husband’s gaze and a rollercoaster of events where emotions run high for the readers in which topics like sexism and reality of a bigoted society is not sugar coated to educate our generation of how it truly was for our ancestors and that is where Supriya stands best.

True to the spirit of her times Meera and her team secretly rebel against the British East India Company and her boss, Captain Keene. And all this right under his nose while taking refuge in his house thus giving the story a twang of action and adventure.

Her character development is the most satisfying thing one could offer, and the plot twist was the most unexpected and worth the read. The writing style in this book is sparse yet hard hitting. Raw and strong as fire, fierce as flame indeed. The vocabulary used to describe the exotic setting is poetic with use of personification, similes and a great example of well written narrative, descriptive and persuasive writing. To prove my point here are a few examples of how the author describes a setting

“In the distance, I could see dozens and dozens of taller buildings and canopies, some illuminated by tiny flickering lanterns that were twinkling like the stars peeking through the clouds above us.”

Or the part where the protagonist compares the sparrow that tried her best to save her baby from a ravenous cat.

Ending it with a quote,

“A little bird was able to fight that hard for her child risking her own life in the process. Yet my mother had not spoken up when I was in danger.”

All of this in the first two pages of chapter nine. Chapter twenty-three makes you really ponder on who is right and who is wrong given the situation and opens doors to the perspective of both Bhavni’s and Meera’s opinions. However, the message is clear and empowering especially for young girls. A true form of feminism where women should be treated equal to men, where equality and equity should lie and an insight on India’s struggle for independence in 1857.

Supriya has outdone herself once again and in my opinion this book is so much better than her bestseller “Ahimsa”. Don’t get me wrong, that book is my all-time favourite but comparing the plot, the pace and the character sketch, this one holds its own place. The relationship between the reader and the author has improved so drastically in this new one and this excited me. What is in store for the future, I wonder.

Every Indian parent should give this to their kids to read and educate themselves. I am grateful to the author for sharing stories that are utter perfection and need to be known.

If you enjoyed this review and wish to buy the book from Scholastic India (kbc affiliate link), type STRONG AS FIRE in search after clicking this red button.

Should you wish to buy this book from Amazon (kbc affiliate link), click here.